Well, I think it’s probably going to be a horror game, I can’t see anything non violent/horror based coming from a sentence that starts with ‘[on this date] guts will be [blank here]’.  Unless we’re talking the world’s most ridiculous over the top Sonic the Hedgehog game.  Or maybe the world’s first Mario and Sonic at the Olympics meets House of the Dead crossover.

What will this game be?  What’s the picture they’re teasing?  Read on to find out… 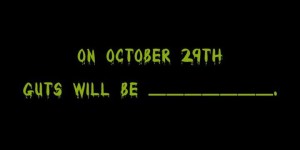 That’s the picture.  Not much, but I think the choice of text colour, font and wording gives away much of the intent here.

So what’s this mystery game likely to be?  Well let’s start with the seven letter blank space.  In that, it seems the most likely words are spilled, spelled, or something else along those lines.

What does this leave as possible?  Well, based on the Wikipedia page for Sega franchises, there are exactly three possibilities.

Practically speaking, I’d count the first out for obvious reasons (it’s never been on a Nintendo system and isn’t quite as over the top as the next two), meaning that my personal top two predictions are either a new House of the Dead (most likely option) or a new MadWorld/Anarchy Reigns sequel (less likely).  Either would be nicely welcome on the Wii U, what with it’s general lack of ultra violent third party games involving copious amounts of gore and horror elements.

What do you expect this game to be?  Will it even be a game at all?

I’m hoping it’s House of the Dead! I wouldn’t mind playing that on my 3DS. Although I’d prefer Condemned too, even if it does seem unlikely.

pLEx Recently i have been so very low on money and debits were killing me from all sides. That was Right Until I decided to make money.. on the internet! I visited surveymoneymaker p net, and started doing surveys for cash, and surely i’ve been great amounts more able to get around financialy! I am so happy that i did this! B4BS