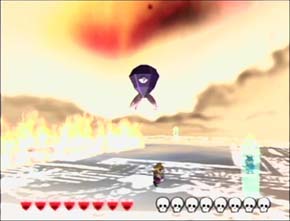 Wow, it’s been a while since I wrote one of these Nintendo unknown facts and trivia articles!  But returning at last, here are five more interesting facts about Mario games that you probably didn’t know about the series.  So if you want to find out about interesting beta content, a strange Mario cameo in a recent Nintendo title and the strange situation of Wario World’s final boss, keep reading!

Okay, it’s not confirmed that this guy genuinely was meant to be based on the boss from the game (although his design is a very obvious reference to Yoshi’s Island in general), but come on.  He looks exactly like Bigger Boo at his smallest, and exactly like he’s going to inflate after being hit!

Perhaps Nintendo originally planned for the Super Mario World 2 foe to make a surprise appearance as a mini boss or something?

4. That strange pipe in Yoshi’s New Island isn’t what it seems

Our next fact, is one related to a game thats just came out.  Indeed, if you haven’t beaten the game yet (and actually have an interest in doing so), you might want to skip this entry entirely due to major spoilers.  Otherwise, read on!

In Yoshi’s New Island, you’ll encounter a strange pipe with eyes throughout the game.  It releases wings for Yoshi to use if he dies too many times, gives him items to make him invincible and quite a few other things besides, so it’s always shown to be a ‘heroic’ NPC even before the ending. 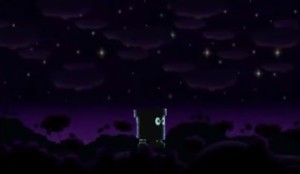 Above: I’m talking about this guy.

However in the ending, guess who it turns out to be?

Here, watch the clip at the end:

Yeah, turns out it’s Mario.  As in, the modern day, adult Mario, who somehow time travelled to the past to stop his baby self being killed or capture by Bowser and Kamek.  He immediately exits the pipe, heads right and literally just jumps into some non existent time portal to the future. 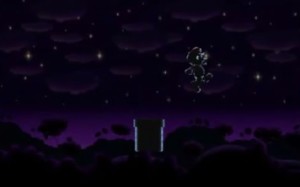 Don’t worry, I get the feeling Arzest didn’t give a damn about a consistent or logical story too.

3. Donkey Kong Country Tropical Freeze has a level whose name comes from a quiz answer in the first trilogy

As you may know from the Iwata Asks interviews about Donkey Kong Country Tropical Freeze, the Retro Studios team apparently played all the Donkey Kong Country games back to back while designing the new titles, using whatever elements (except Kremlings) that they thought would be good inclusions in the new games.  But how’s this for a real retro throwback?

It was mentioned as a wrong answer in one of Swanky Kong’s quizzes in Donkey Kong Country 2. 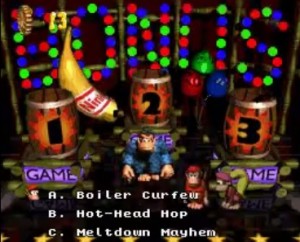 And then lo and behold, 20 years later, we get this:

Yeah, that level is Meltdown Mayhem from Donkey Kong Country Tropical Freeze.  Retro really did go THAT far back and THAT obscure when looking for things to take inspiration from.  Just wow…

2. Yoshi was going to be in Super Mario 3D Land

So we’ve got Mario’s appearance in a Yoshi’s Island game.  A level from a 20 year old quiz becoming a real level in a modern Nintendo title and Bigger Boo in Super Princess Peach. What could be even cooler than all of this?  An even more unknown yet awesome piece of trivia for Nintendo fans to think about?

How about Yoshi in Super Mario 3D Land?

Yes seriously.  At one point, Yoshi was planned to be in the 3DS Mario platformer.  Complete with the same sound effects as in his original Super Mario World appearance!

Unfortunately, he must got cut out sometime during development, since Yoshi is nowhere to be seen in Mario’s 3DS adventures.  Nor in Super Mario 3D World for that matter.

1. We Got Massively Ripped off with Wario World’s Final Boss

Seriously.  Thought Nintendo were already kind of bad when it came to leaving out good content in the Western versions of their titles?

Well, have a load of this.  Wario World’s final boss… was literally cut in half for the international release.  As in, the Japanese one gives the Black Jewel a whole new attack phase and even change in battle music that isn’t present in the English version!  Have a look at it in this video…

Yep, there’s even new attacks in that last phase, which gamers in the US and Europe never got to see or avoid.  So thanks a lot Nintendo and Treasure, for ripping us off with an unfinished game rather than giving us the full experience.  What a cheek.

And that concludes the list.  Did you know anything mentioned on it before reading this article?  Are any of these facts interesting ones?  Comment on the list in the comments below or at Nintendo 3DS Community.com today and give your opinion on everything that’s been said.

Woah! That goes to show that retro studios really is an amazing company that works hard on it’s games. OMG I love Wario World one of my favorite games but what the heck Nintendo why would they even do that with the final boss?

Actually Wario World was released in other regions before Japan which means that half was added in the Japanese version, not taken out of the PAL or NTSC versions. It does suck that we don’t have that other half though.