Pokemon X and Y; Lots of New Info and Screens!

We may have already posted the new fossil Pokemon evolutions, but it turns out that today’s been a busy day for Pokemon X and Y information.  So here’s a bunch more interesting stuff that’s been revealed through news posts, interviews and more…

Many Kanto Pokemon are available in the early part of the game, and you don’t meet Professor Sycamore until after the first gym (at which point you receive a Kanto starter too).

Pokemon introduced in X and Y won’t have Mega Evolutions; the focus is on giving those to past gen species.

The game has been made much faster, to cope with potential competition from free games and the like (or cheap ones on phones). In other words, the pace of the adventure is faster and training is made quicker and more convenient.

Aurorus has a move called Freeze Dry which is an Ice move that can freeze opponents. However, it’s effective against Water types regardless of its typing.

Pokemon Centres have both a Poke Mart and a place you can change your outfit.

Tyrantrum has a few more pictures online, which can be seen below. Includes full body artwork of the species: 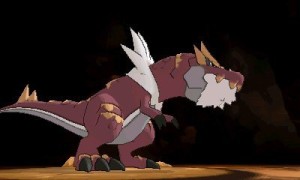 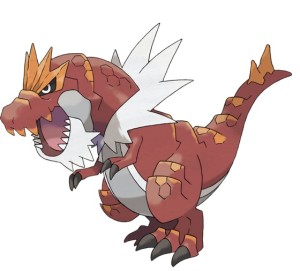 You can hold B to run from the start of the game, not after getting an item.

Main character controlled with the circle pad. However, grid based movement is still involved.

The names X and Y taken from geometric X and Y axes, convey a message encouraging people to find a middle ground.

Xerneas evokes imagery of eternity, Yveltal those of destruction.

Pokemon stored there aren’t deleted if your trial/payments run out, you just have to pay to regain access to them.  Probably a good thing.

Overworld/experience outside of battle doesn’t use 3DS system’s 3D effect, is to render more graphical detail and stuff.  As mentioned here;

We really wanted to make the overworld – the field – as beautiful as possible. We could put in a lot of grass and flowers, and try to make them as pretty as possible. When you don’t use the 3D effect you are able to render quite a bit more on the 3DS. That’s one of the reasons why we wanted to leave it off in the overworld, because it gives us more power to show off more beautiful graphics. That plays to the strengths of the 3DS, where you don’t require glasses – you don’t have to put them on and take them off at certain moments. You can just leave it on and then at certain specific moments, the 3D will come on and it will be more surprising or impactful to the player.

On another note, perhaps the 2DS has something to do with this?  After all, if you’re releasing a 2D only system at the same time as Pokemon X and Y and a significant amount of Pokemon fans might be buying it… you may as well put the power to better use than just a 3D effect.

Pokemon X and Y also nearly had a voice translator that could tell you what the Pokemon what actually saying.  Localisation issues and the fact over 600 Pokemon would have to be accounted for meant the feature was scrapped.

The main differences between the two versions are the legendary Pokemon on the box and some different Pokemon between games, with a few story/theme changes occurring too.  In other words, more like the older games, less like Ruby and Sapphire or Black and White/their sequels.

They’re trying to keep most of the new Pokemon secret to keep it a surprise and focus on the mystery of ‘what species you’ll encounter next’ when you play the game.  Hence why mostly older Pokemon have been shown so far.

More Pokemon in this game than ever before (I assume that means more available to catch in game, not just the obvious 100+ new ones added in each generation)

Caterpie, Pidgey, Pikachu and Psyduck confirmed as returning Pokemon you can catch early on.

Pokemon X and Y have now topped one million pre-orders.  This is pretty darn good, especially considering how few other games have done that (only a couple of really big franchises have ever even got close).

Mega Evolutions are not inspired by Digimon, instead brought about by an evolution theme in X and Y and a need to see it brought to the next level.

Professor Sycamore is studying Mega Evolutions, asks people to do favours like giving the main character/player Pokemon. He also challenges you to battles.

Mega Evolutions are temporary and end after the battle. Already known I guess, but nice to know anyway.

So that’s all the new information about the new games. Hope it was interesting, it took me quite a while to piece together from all those different news sites talking about it (which can be found via the source links below).