A new Mega Evolution being revealed right in the middle of E3?  And right after the new trailer for Pokemon Omega Ruby and Alpha Sapphire, which already had a bunch of new Mega Evos and things?  Well, isn’t that unexpected!

Either way, Nintendo has officially revealed a new Mega Evolution for Sableye.  It involves the Pokemon holding onto a giant gem to protect itself in battle, and boosts Sableyes stats in what is likely a fairly significant way.  Mega Sableye also retains its familiar Ghost/Dark typing.

So if you want to hear more (and see the official trailer), head inside!

And here are the first screenshots showing it in game: 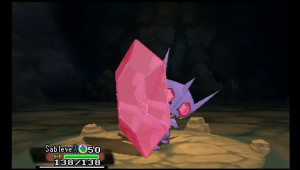 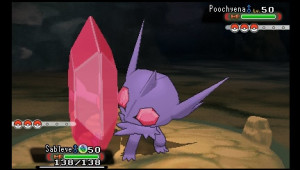 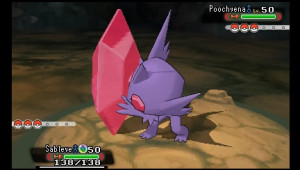 So yeah, what do you think about this new Mega Evolution?  Is Sableye a Pokemon that deserved one?  Do you like the design and potential new abilities?  Post your thoughts in the comments here or at Nintendo 3DS Community.com today!

If this was a Zelda game, Sableye would be rich. 🙂 Cool design, still.

And I think since Mawile, Sableye’s version-exclusive counterpart in R/S, got a Mega evolution, Sableye deserves one to keep things fair.