Back in the early days of Animal Crossing, you could collect NES games to play inside the actual game.  Unfortunately, not only has this feature never returned in a later Animal Crossing title, it’ll apparently never happen again.

Please consider it’s not happening ever again.  At the time, we didn’t have a Virtual Console system.  We thought that playing games inside of a game is kind of funny, and we wanted to do it. But now there’s a Virtual Console where you can play classic games, so we don’t think we will be doing that in future titles. 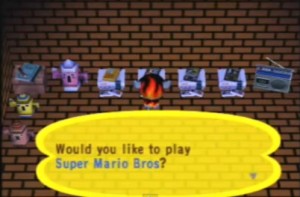 Above: Not happening in future.

So basically, the Virtual Console means this feature will never return.  And honestly?  I see exactly where they’re coming from.  Why give away free versions of the games in Animal Crossing when you could charge real money for them on the Virtual Console?  I mean, it was a nice bonus, but Nintendo wants every possible cent from reselling their classic games, and giving them away for nothing doesn’t factor into that.

So there you have it.  You won’t be playing emulated versions of classic NES games in Animal Crossing any time soon.  Are you disappointed by this?  Or do you understand Nintendo’s decision and not care too much?

| I wish they would do it for DLC. Then they would have the price of Animal Crossing PLUS the original game. I mean, I would love to wander back to my AC home to play some more Smash 64. |