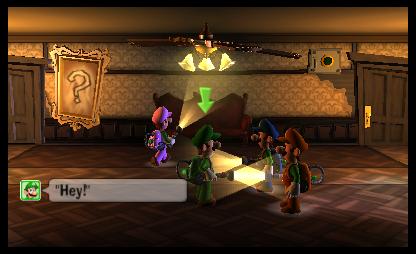 Yes, they’re more than a tad late given that US news sites and Nintendo’s other branches have talked about the multiplayer mode about a week back, but now Nintendo of Europe have finally put out a press release talking about the game’s multiplayer mode and updated the official page to list it as a feature.  Here’s what they had to say:

28 January, 2013 – Nintendo has revealed new information about Luigi’s Mansion 2 launching exclusively for Nintendo 3DS and Nintendo 3DS XL in March 2013. Luigi stumbles through multiple mansions to capture ghosts and solve puzzles armed with his trusty ghost-catching vacuum cleaner, the Poltergust 5000 and, in a series first, the game will feature a local and online multiplayer mode.

The game is a fully-fledged sequel to the Nintendo GameCube title that first put forth Luigi as the reluctant hero, battling his own nerves and a bevy of ghosts on a mission to save his brother Mario from a haunted mansion. On Nintendo 3DS, Luigi will face an even greater challenge for solo players to enjoy in addition to the new multiplayer mode.

Up to four players* can join up and journey into the Scarescraper, a building jam-packed with paranormal creatures. In Hunter Mode, each player controls a different colour Luigi and is challenged to hunt down ghosts and use effective teamwork to clear each floor of the tower before the clock strikes zero. Bonuses and upgrades can be earned depending on how well the team performs, helping to get the ghost-hunting team to the boss battles awaiting at the top of each tower. Players can choose the number of floors in this mode ranging from five, 10 or 25, as well as adjusting the difficulty to cater to both new and veteran gamers. Fallen players can even be revived by their teammates to keep the adventure going.

Luigi’s Mansion 2 will be available across Europe in March 2013 exclusively for Nintendo 3DS and Nintendo 3DS XL, both at retail and as a digital download from Nintendo eShop. And what’s more, players who pre-order the game may receive a limited edition Boo Anti-Stress Ball to grip tightly when things go bump in the night…

* Additional systems and games may be needed for multiplayer and are sold separately.

So that’s Nintendo of Europe confirming the game’s multiplayer mode.  Interestingly, that doesn’t seem to be the only thing they mentioned either, note the talk of a ‘limited edition Boo Anti Stress Ball’ in the last paragraph of the press release.  Seems like Luigi’s Mansion Dark Moon could be getting some nifty pre-order merchandise…