Like The Legend of Zelda A Link Between Worlds and want another chance to draw one of your favourite characters?  Like having Eiji Aonuma himself acknowledge your talents and the idea of having a nice gold star attached to your name in future?  Well if so, it seems like you’re in luck, since a drawing contest based on the game has just been announced on Miiverse earlier today!

Hi, Art Academy SketchPad users! This is Eiji Aonuma, the Producer of the Legend of Zelda: A Link Between Worlds. I was so impressed by the Luigi Exhibition that I came here to ask you all to post drawings based on the Legend of Zelda series!

For this event, the theme is to draw your favorite characters from the Legend of Zelda: A Link Between Worlds!

Express your creativity by setting characters from the game in your original situations.

Remember, this is a global event, so please avoid using writing in your work.

The event will end on Feb. 16, 2014 or after there are over 1000 comments, whichever comes first. Works that stood out to us will be recognized under the categories of Gold Star, Silver Star, Bronze Star, Aonuma’s Favorites, and Art Academy Favorites in this community. Depending on what drawings are submitted, we may add more categories!

Regardless of if you own Art Academy: SketchPad or not, I am also looking forward to seeing your Yeah!s, comments and the names of artists you would like to compliment.

If you need character reference, a link to our Japanese official site is below. This event is not only about drawing skill but also creativity, so don’t be shy and have fun!

Note: If you submit a drawing as a comment to this post, you grant to Nintendo the royalty-free right to publish your drawings online and offline.

So those are the rules apparently.  Nothing too difficult to adhere too (have to use Art Academy Sketchpad and have to feature at least one character from the game), and the fact you get official confirmation from Aonuma himself that he likes your work is just awesome. 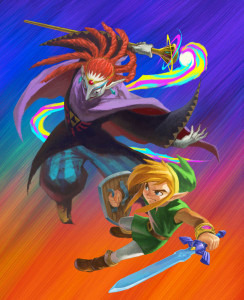 And how about Link himself?  Could you submit a picture based on Majora’s Mask, Wind Waker, Twilight Princess or Skyward Sword and say that Link himself represents A Link Between Worlds?

But hey, that’s just my rambling about rules and stuff.  You Zelda artists out there should definitely go and try out this contest!