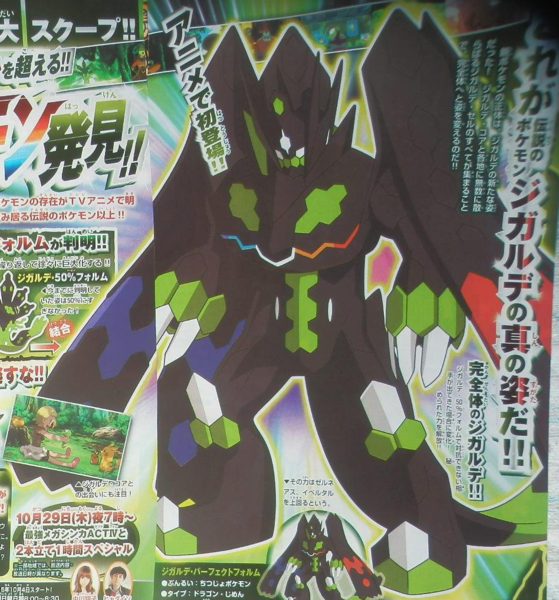 But now, it seems we have an answer!  What’s more, we also have an answer to the question of who those ‘new’ Pokemon shown in a recent trailer are!  You know, these ones:

So what’s the story here?

Well to put it simply, both the small green Pokemon and the large dragon like creature are both Zygarde.  Yes, really.

This is because Zygarde has multiple formes with different levels of power.  So the small green blob is called Zygarde Core, and acts as the mind of the new formes.  It also has a flat version called Zygarde Cell, which is presumably what you get when the core has no additional forme set up and is set to fight on its own.

Above: Zygarde Core and Zygarde Cell

The one we’ve seen in the games, is called Zygarde 50% forme.  Basically, it’s Zygarde at 50% of its power, which explains why it’s fairly weak compared to other legendaries like Xerneas and Yveltal.

There’s also a dog like forme, which is called Zygarde 10%.  This is (as you can probably guess), Zygarde when at 10% of its power.

Finally, there’s the scary looking dragon/mech type monster we saw in earlier magazine scans, which is called Zygarde Perfect Forme.  This is Zygarde when at 100% of its power, and is very, very dangerous looking indeed:

So how powerful is this thing?

Well look at it this way.  Zygarde 50% forme (it’s base one), has a base stats total of 600.  That’s on par with pseudo legendaries like Tyranitar and Metagross.  You know, at FIFTY PERCENT of its power.

If it’s stats somehow sync up with its description, you’re gonna have a Pokemon with about a 1200 base stat total.  That would be bloody scary given that Mega Mewtwo X and Y, as well as Mega Rayquaza, have a total of only 780. Either way, it’s said to exceed both Xerneas and Yveltal in terms of power, so it’s most definitely gonna hit the 700-800 mark for base stats.

So those are the new formes for Zygarde in the Pokemon series.  This raises a few questions:

But what do you think about Zygarde’s new formes in the Pokemon series?

I almost wonder if it isn't a Mega form…