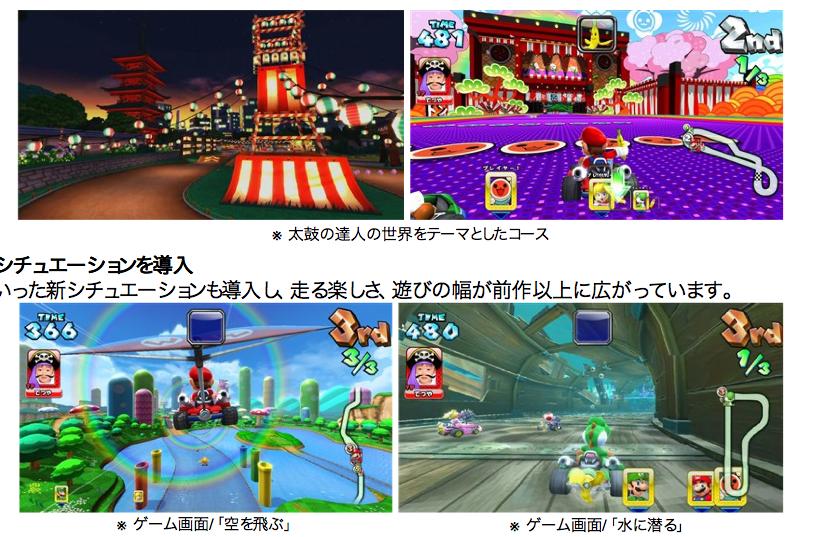 Does anyone remember those two arcade Mario Kart games that were released a few years ago?  They were made by Namco, had a few Pac-Man characters alongside the typical Mario cast and were pretty much ignored by Nintendo when it came to their opinion on the series (Mario Kart 7’s number doesn’t count either of them).  Well it seems like Namco Bandai isn’t exactly stopping with this series, since they’ve just announced a new arcade Mario Kart game, this time called Mario Kart Arcade GP DX.

This time however, it seems like they’re taking a bit of inspiration from Nintendo and Mario Kart 7, since the game features gliding and underwater style sections and generally looks quite a bit like the 3DS title.  Here are a few screenshots of the game to show what I mean:

You can definitely see the Mario Kart 7 influence there with the gliders and Koopa Cape like level, can’t you?  And it also seems like the game will feature characters and settings from the  Taiko Drum Master series, showing yet another random Namco franchise that has now had reps added into the arcade Mario Kart games (because as well all know, three Pac-Man characters and a freaking tamagotchi aren’t enough).

Still, it’s nice to see another Mario Kart arcade game after all this time, and this one will be available on display at the Japan Amusement Expo between the 15th and 16th of February this year.

So will the game ever get a release outside Japan, hopefully as a home console rather than arcade title (given that arcades are practically dead in the US and nearly non existent in the UK)?  Will Namco ever make the level design better than the boring, fenced in levels of the first two titles and more like that in actual Mario Kart games?  Let’s wait and see, since this game has the potential to be a real improvement to the series.