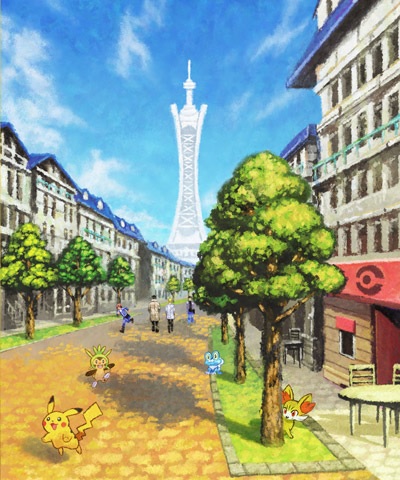 From the same source who managed to predict the last Pokemon X and Y reveal (as in the new Pokemon and region info mentioned in Coro Coro Magazine and on the official website), here’s the new round of rumours:

Pancham evolves into Pangoro in the early level 30s. In order to evolve Pancham into Pangoro, you need to have one other Dark-type Pokemon in your party. Pangoro’s type is Fighting/Dark.

A Pokemon named Inkay evolves into Malimar. To evolve it, you have to hold your 3DS upside-down when it levels up (the 3DS has an accelerometer and gyroscope, so it can detect that). Malimar’s type is Dark/Psychic.

A Psychic-type Pokemon named Espurr (ESP + purr) evolves into Meowstick (Meow + mystic?). (Sounds like Psychic-type cats. Meowstick’s name sounds too similar to Meowth to me though.)

Like in B/W you have two rivals – one is friendly and the other is competitive. Your rival that is more friendly gives you his/her fully evolved starter Pokemon after you beat the game.

Another professor named Sycamore gives you either Bulbasaur, Charmander, or Squirtle.
Even though it shows the player riding on a Gogoat in the new trailer, players can’t ride on their own Pokemon. What was shown is just an alternate way of getting around Lumiose City and it only works with Gogoat.

HMs still exist but there’s a lot less of them.

Players will be able to see their Pokemon’s EVs (probably through the same in-game facility mentioned in the other post).

A new move, Belch, is a Poison-type attack that has a base power of 120. The user must consume a held Berry to perform it.

Draining Kiss is a Fairy-type attack that heals the user for the same amount of damage performed. It has a base power of 60.

In case you missed our correction the other day, the Starters’ final evolutions are Fire/Psychic, Grass/Dark, and Water/Fighting.

Personally, I’m not sure about all of these.  I mean, the starter final evolution types and the moves seem plausible enough, but a Pokemon which requires you holding the 3DS upside down to evolve?  That seems a little far fetched, almost like those ridiculous fake cheats from the late 90s.  And a Pokemon that evolves based on the types of others in the party is interesting too…

But all in all, it sounds plausible enough in general.  What do you think of this latest round of Pokemon X and Y rumours?

Wait until Pokémon Smash. Most of this stuff is likely fake, especially the Fairy-type attack. I decided to write a lengthy post with my opinions on this rumour though: Gyroscopic controls to evolve a Pokémon is a lame idea (it’s more likely X and Y will take control of the augmented reality functions to show Pokémon battles in a real environment) and if there was a Pokémon that evolved depending on what Pokémon are in the party at the time would probably cause fans to whine about how ”difficult” the evo is to get. Espurr and Meowstick are wayyy to… Read more »