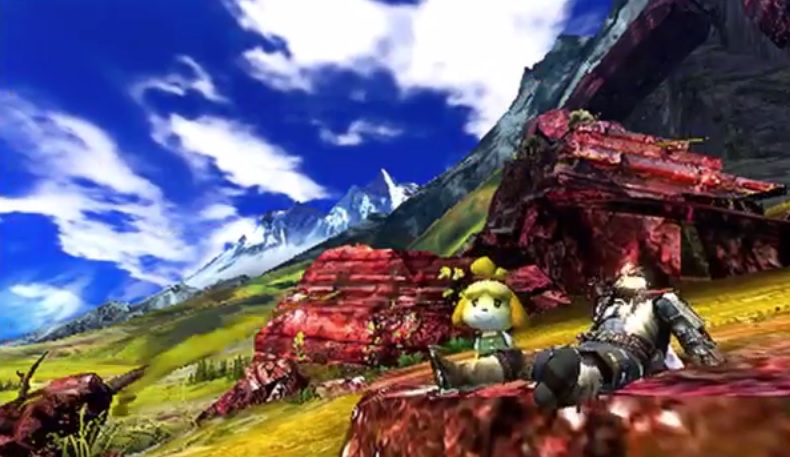 What is it with Nintendo and Animal Crossing DLC as of recent months?  First we got the Villager and co in Super Smash Bros, then we got him and Isabelle as playable characters in Mario Kart 8, and now…

We get this.  Isabelle and Mr Resetti costumes for Monster Hunter 4.  No, that’s not a joke.  You can now dress up Felynes as Animal Crossing characters, in a crossover DLC pack best described as ‘utterly bizarre and likely at complete odds with the game’s general tone’.  Have a trailer:

So now that’s up, what do I think of this?  Well to be honest, I’ve got mixed feelings.  On the one hand, I really, really like how Nintendo is going all crazy with the crossovers recently.  I mean, hasn’t it been everyone’s dream to have Mushroom Kingdom Fusion style wacky crossover games and concepts based on Nintendo games?  And now with the Nintendo crossover stuff in games like this, Mario Kart, etc, it seems like Nintendo are finally listening.

On the other… some crossovers do not work well with a game’s tone and setting.  Like say, Mario and World War 2.  Or monsters from games like Doom in a Mario platformer.  And this is a great example of it.  The cartoony Animal Crossing characters are an interesting idea, but practically speaking, they just look really, really out of place in the semi realistic fantasy world of Monster Hunter. Mario Kart?  Fine, they’ve got a similar enough cartoon aesthetic to fit in with the Mario cast and Link.  Here however, it’s like putting Mario in Metroid Prime or having a Pokemon X Call of Duty crossover, absolutely ridiculous looking.

But what do you think of this DLC?  Interesting, or a bit too at odds with the game’s tone?