Uploaded by Youtube user NintendoFuse, it shows not only most of the Bowser’s Tower mode and Bowser Jr as a playable character, but all kinds of other neat content too!  Watch the videos in the full post, as well as my piece by piece summary of what’s going on, complete with somewhat cynical sounding comments!

To start, here are the vids:

But what can we see in all of these?  Well, let’s have a look shall we?  First up, evidence that Bowser Jr is a playable character in Mario Party Island Tour, and is presumably unlocked by doing something later in the game:

We also see our opponents in this game… strange looking clones of the main characters that serve under Bowser’s rule.  The first floor or two has Luigi clones…

Then later we’ve got Yoshi clones…

And at one point, Bowser Jr goes against shadowy clones of himself.  Yes really:

Wario gets clones too.  Who the game says ‘couldn’t be worse than the real one’.  Hey, Wario’s not that evil or mischievous!  Besides, we already had a more evil Wario.  He was called the Shake King.

Boo Clones come after this.  Hang on, Boo clones?  Couldn’t Bowser just… find some normal Boos?  Boos are a species after all.  It’s like McDonalds needing meat for burgers and spending millions on genetically engineering cow clones.  Why not just use the real thing?

Toad clones come later too.  Made more amusing by Toad’s rather unfortunate comments:

Gah!  It’s ME!  And there are three of me!  Well, this might sound weird, but do your worst to me!

Do your worst to me? Okay!  *Shoots him in the head with a shotgun*

Well, you didn’t say WHICH ‘you’ I should target.

And to top it all off, we get… Daisy clones!

Interesting choice of characters to clone here.  Perhaps it changes based on which character you’re playing as?  Because it seems odd to get no Mario or Peach clones.

Each floor also has a boss too.  First boss is a Goomba Tower from New Super Mario Bros 2:

Which to be honest, absolutely sucks as a boss choice.  Interesting battle, but come on… why not use the Koopa Bros from Paper Mario?  Those guys stack on top of each other to attack, and they’ve got far more charm and personality than a bunch of generic Goombas.  But hey, I guess ND Cube are a bunch of robots who’ve only ever played the ‘main’ Mario platformers.

A Chain Chomp follows.  Yeah, seen this before.  In the last game. Still, its intro before the floor set is funny.  Oh Bowser, you’re so non threatening:

Yes really.  The most hilarious quote ever:

I have other ways of keeping you out.  More formidable guards, with FANGS and scary noises!  Just you wait!

Because as we all know, its fangs and scary noises that make people and things truly terrifying!  Seriously, Bowser sounds like he’s marketing the next Goosebumps story or something with that description.

Also, the battle really, really sucks from what I can tell.  All it does is charge at you a few times, then jump into the air.  At which point you have to lure it onto a plate to hurt the boss.  In other words, like a really crappy fan game/ROM hack boss that does the same move a few times and then gets opened up to attack, with a ridiculous amount of the battle just being aimless dodging.

Mr Blizzard is the next boss.  Why is this snowman thing returning more often now?  Who knows, he seems to go between ‘completely absent from all Mario games’ to ‘present everywhere’ every five years or so.  There’s a quote you hear before his fight which is almost Batman and Robin level groan worthy:

Bah never mind.  I have a feeling my next guard will give you a perfectly chilly reception!

What next? Ice to meet you?  God, the writers here seem like they’re straight out of the 80s 0r 90s.  The same people who think Captain Planet is all edgy and ‘cool’.  His battle looks fairly interesting, although perhaps a bit annoying to replay (it seems to function a bit like the ski jump thing from Mario and Sonic at the Winter Olympic Games).

Oh, and Bowser?  Defeating Mr Blizzard isn’t kind of impressive.  We all did that in Super Mario 64.

Big Bob-omb follows.  There’s a call back to the Mustache thing from Mario 64 DS in his intro:

And before the battle, the game makes a serious blunder about his name:

King Bob-omb?  Would it seriously kill these people to actually play Super Mario 64 at some point and remember the character’s name?  Ah well, it’s semi understandable if you’re translating from Japanese.  Big Bob-omb’s name in that region is Bomu Kingu (Bob-omb King) after all.  I guess we should be lucky that the translators usually have more talent than this and don’t make similar mistakes elsewhere, otherwise we’d get such ‘fascinating’ world names as ‘Fire Land’, ‘Water Land’ and others like them.

Dry Bowser comes next.  But wait, what’s this?

The next guard is a close family friend!  BWAHAHA!

Is Bowser saying that Dry Bowser isn’t the same person, and is just a close family friend of Bowser and his family?

So the reason Dry Bowser is a seperate character in all those games is because he’s just a coincidentally Bowser like friend who’s somehow been reanimated as a zombie skeleton?

That’s an interesting twist.  It changes everything about New Super Mario Bros!

Or maybe they just didn’t give a toss.  Eh.

We also get to hear this before the battle:

Maybe that Dry Bowser over there has something to do with it.

So perhaps Dry Bowser is a species now?

Either way, his boss is just another ‘repeat this sequence of buttons Simon Says style to attack the boss’ mini game.  I swear I’ve seen this thing in at least two or three different Mario Party games now.  And do you know what?  It’s not really much of a battle.

Finally, it all comes down to this.  Bowser Jr vs Bowser!  The Koopa King himself is the final opponent at the top of the tower (obviously)!  What’s his battle going to be like?

Well, it involves trying to shoot down Bowser’s Clown Car in the stormy skies above the tower. 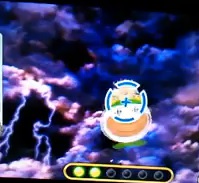 And dodging his attacks while waiting for cannons to appear.  He shoots fireballs, like you’d expect…

Although they do get somewhat quicker and more common every now and again:

And another attack involves him shooting fireballs in a spreadshot pattern while meteors fall down at the same time, which looks fairly neat.

He also tries to smash you to a pulp with the Clown Car’s sheer bulk, kind of like in Super Mario Bros 3 and Super Mario Galaxy (where he did the same with ground pounds).

Finally, once it’s all done, Bowser blasts off in the distance like Team Rocket in the Pokemon anime series.  Bowser’s blasting off again?

It comes complete with that little star that always appears when someone flies into the distance.  You know, like in Smash Bros.  Or after that second boss fight in Wario Land Shake It.

But wait, that’s not all!  Oh no, cue the army of clones on the roof! Mario clones too!

Never mind.  Bowser Jr just stomps them to dust in a cutscene, before annihilating the evil bubble machine on the roof.  Disappointing…

And then Bowser returns and says he let Bowser Jr win to see him become a hero?  Okay, what?

And Bowser Jr and Toad get literally punched off the tower by a giant spring loaded boxing glove in the clown car?  Wow, talk about a disappointing ‘ending’. Guess the idea of ‘conflict’ is too much for a Mario Party game, or the Wii series loving ND Cube.

But yes, that’s all the boss battles and clones in the tower.  Are they particularly interesting?  Not really, but at least we’ve now seen footage of all of them and know exactly what awaits there.

The minigames look interesting too. 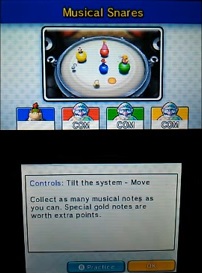 Although this mini game looks ominous.  Where have we seen ’tilt 3DS to move character round a circular arena’ before?  Oh yes, the Bowser battle in Dream Team, the one against Giant Bowser where the gyro fails about 25% of the time.  Still, at least this one is in an arena with walls, and is about collecting items, so the controls failing wouldn’t be the end of the world.

There are also an awful lot of neat Mario references and themes in these mini games, which is nice given the sheer lack of them in many Gamecube era Mario Party titles.  You’ve got a game involving Cheep Chomps:

There’s even a Mario panorama style game where you have to identify the right picture of Mario, with the pictures being loosely based on New Super Mario Bros and Mario 3D Land!

Others I see are:

One involving a Mattermouth from Super Mario Galaxy 2…

One involving spinning Bowser like tiles from the same game…

Heck, one even exists with Mario Galaxy style gravity!

So the mini games certainly look more interesting and ‘Mario like’ than those in other Mario Party tiles, which is probably a good thing.

Other interesting things exist here too.  Like Bowser’s ‘penalties’, random punishments selected every few floors for the hell of it.  Some of these sound interesting:

Some are blatantly jokes (which he doesn’t actually honour):

Go directly to the top floor!

And others kind of suck.  Go down one floor? Okay, that’s so terrible.

Bowser also has some rather… odd quotes.  Like this one (said to Bowser Jr):

What’s next, Bowser Jr?  WHO ARE YOU?

Is he saying he doesn’t know who Bowser Jr is?  Okay then, that’s pretty stupid even by Bowser’s standards.  And is he also implying that Bowser Jr’s going to somehow kill himself?  I don’t know.  Whoever wrote this ‘story’ just didn’t put a lot of effort into the script.

So that pretty much sums up the entirety of Bowser’s Tower from the game.  Fairly mediocre bosses, lots of fighting weird shadow clones of characters, a look at some of the decent mini games… it’s okay, just not quite as interesting as I was expecting from the official site’s description.

What do you think of it all?

Shucks! I really appreciate you guys featuring my videos 😀

No problem. It’s the only series of videos on the topic, it features new footage of the game, so I thought it’s only right to post it.

There’s a punishment that claims to send you back to the first floor, but anytime I got this he said something along the lines of “that’s just cruel, even by my standards!” and just let me keep going. But supposedly someone said that near the top he actually sent them back down to the first floor. I don’t know if he follows through with the “Bowser’s Minions Get WAY Tougher”, or to lose all your ministars, but I’m assuming no for both. Anyone know for sure?