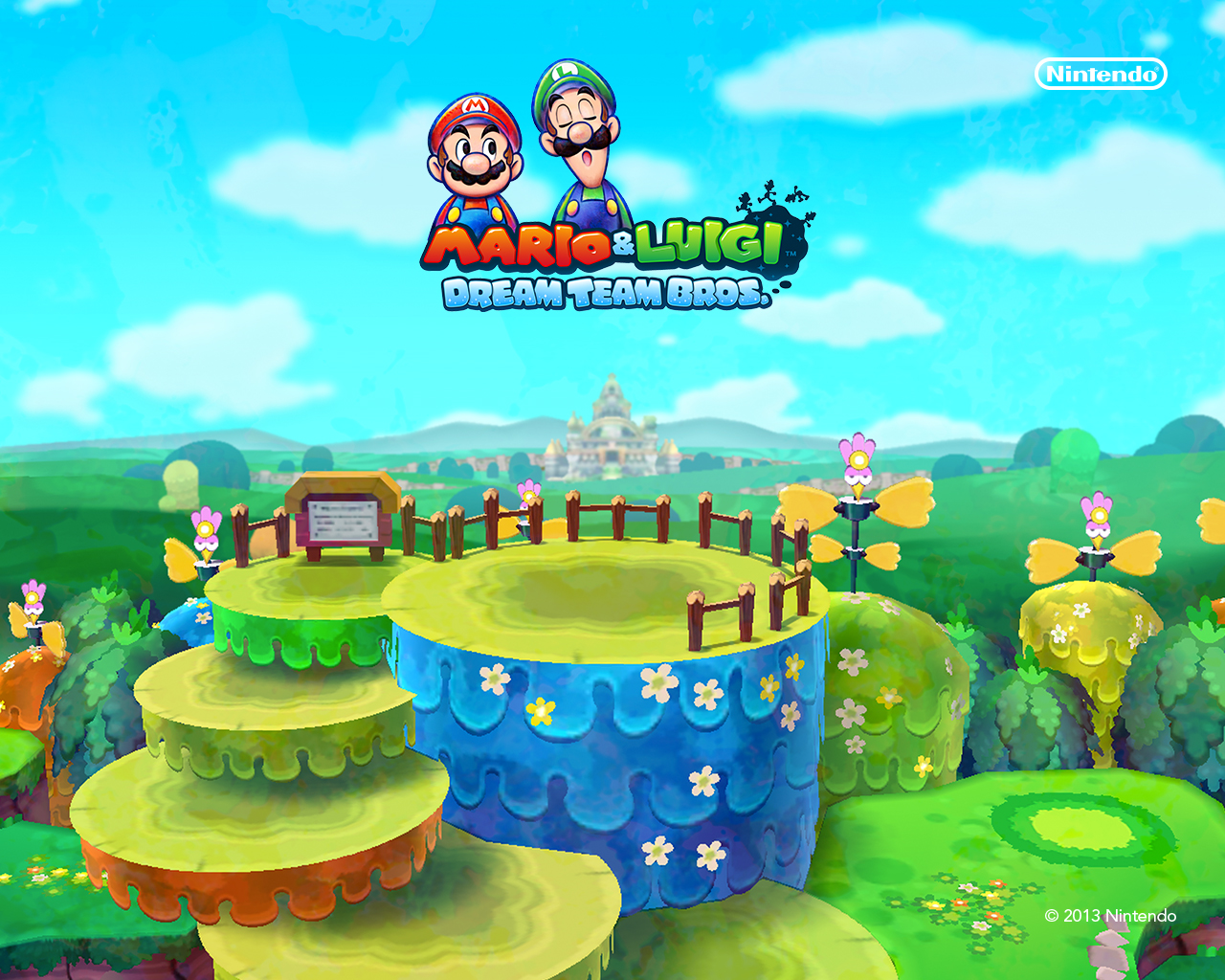 Yes, the official European website for Mario & Luigi Dream Team has now launched, and can be found at the following address:

As you can see, it’s a bit more nicely designed than the Japanese one, and has quite a bit of useful information about the game.   There’s also a trailer, but it’s only the one we uploaded ourselves a while back.  You know, this one:

Still, there’s some new info, so let’s take a look.  First of all, here’s the story page on the site:

As you can see, there’s stuff about a Dr Snoozemore (groan, these sleep puns are ridiculous) inviting Peach and co to a place called Pi’illo Island.  Considering that they don’t even know this ‘person’, you can tell right from the bat that something is about to go horribly wrong.  Heck, the site even lampshades it!

A free holiday, being offered to our heroes by a complete stranger? What could possibly go wrong?

*Thinks back to Luigi’s Mansion on Gamecube* 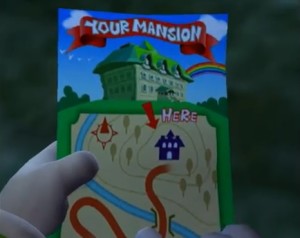 Yeah… the Mario Bros don’t have much luck with free stuff from people and contests they don’t know about, do they?

Still, the story goes on about the usual stuff.  No sign of the (presumably non-existent) benefactor, Luigi learning about his dream abilities, Peach getting captured by the mysterious assailant (who is presumably Antasma, introduced as the villain just a paragraph later…)  All normal stuff.  Except, there are some interesting screens here… 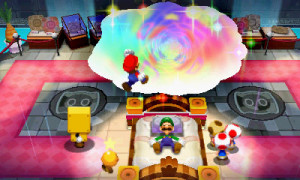 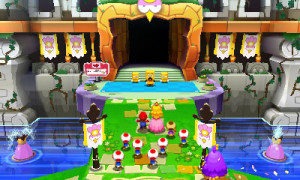 No, not these pictures. But how about this one? 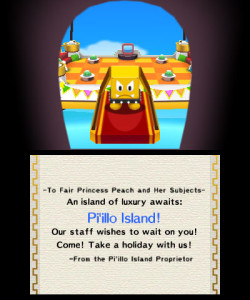 Is that Broggy from Mario & Luigi Bowser’s Inside Story? You know, that block dog Broque Monsieur has, the one Bowser’s uses as a special attack? Why yes it is. What the heck it has to do with this game I don’t know, but it’s included here too.

Maybe the Mario Bros get to use it as a special attack as well?

Moving on, there’s also a nice character page with some official art of the main characters and descriptions taken directly from the official site.  Not much to see here.

However, the battle section is actually quite interesting.  It’s got some new screens showing various things… 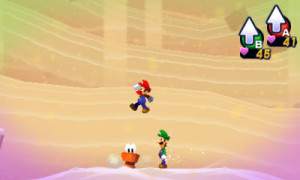 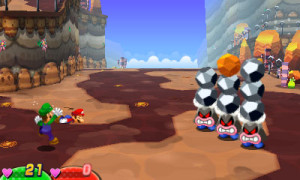 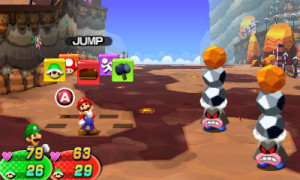 Which look very nice!  Wonder how those enemies can carry so many huge rocks on their head?

But also the first ever screenshot of and information about the in-battle challenges!  Have a look: 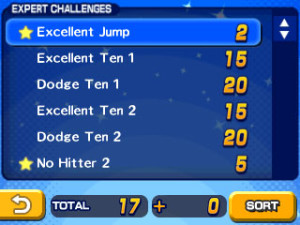 As you can see, it counts how many times you completed each challenge and even lets you sort through them!  According to the site, completing these lets you win items somehow. 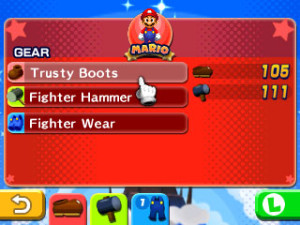 There’s also a screen showing the equipment menu.  Seems you can upgrade the boots and hammers this time round, giving Mario and Luigi new and more powerful weapons to attack with!  Also, given how blank much this space is, could there be yet more to unlock down the line?  Perhaps another few things that can be equipped? 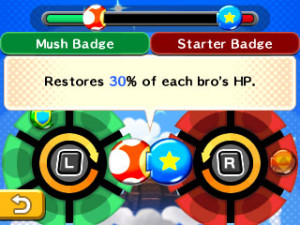 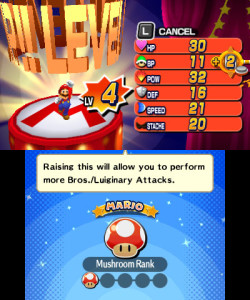 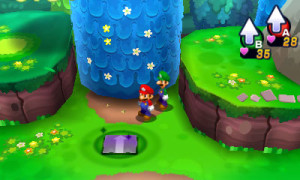 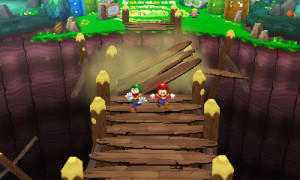 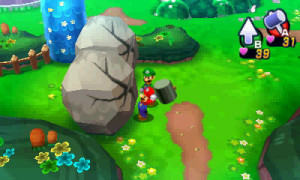 Screenshots of the overworld are featured here too.  The bridge one’s obviously fairly old, but the other two seem pretty new and do suggest a more open plan setting like that of the last two games.  Interesting to know that all of Superstar Saga’s overworld abilities come back too, I also remember seeing footage of Luigi burrowing underground and Mario being made small with the hammer.  Does that mean we’ll see hand powers as well?

This mysterious character makes an appearance too.  No real word on what it is, and despite my file name here, I’m starting to suspect it might not actually even be an Antasma alternate form (the file name on the site is akuma.png, which presumably means devil or demon).

Finally, the site has some nice wallpaper based on the game too, if you want your computer or phone to have a Dream Team inspired look to it.  Here it is: 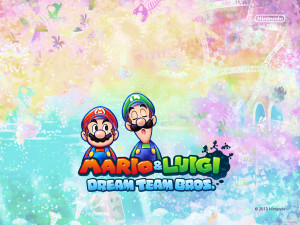 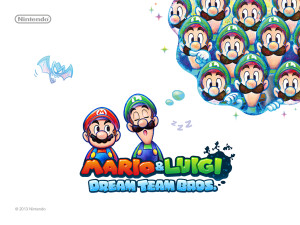 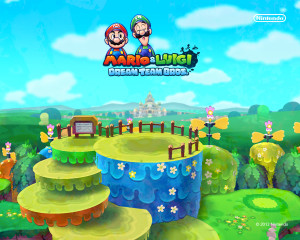 It all looks very nice if I do say so myself.  Especially the nice colourful island wallpaper with the castle in the distance and the entire land laid out in the background.

And that’s the Mario & Luigi Dream Team official site for you.  It’s now live, it has some interesting information, and it’s definitely well worth checking out.  Go look at it right now!