As of just a day or so ago, Nintendo have now launched the official Japanese website for Mario & Luigi Dream Team.  But while it also has some great trailers and videos to watch and some menacing voice clips to listen to, the site also has a nice sampling of the game’s music, which sounds as great as ever!  Have a listen to these songs:

This first theme seems to be the game’s title screen music. And while it does start off pretty slow, it eventually kicks off into high gear midway through, becoming a song similar to the other title themes of the Mario & Luigi series.

This theme on the other hand seems to be an overworld theme.  Is it played in the real world?  The dream world?  Can’t tell, but it’s incredibly relaxing to listen to (as well as ridiculously upbeat and cheerful), so it’s worth hearing at least once or twice.

Next up, we’ve got the Dream battle theme.  Very catchy if I do say so myself, and rather fast paced to boot!

Our next piece of sample music seems to be a desert piece, with a rather ‘wild west’ feel to the whole theme.  I assume it’s played in the area shown in the below screenshot: 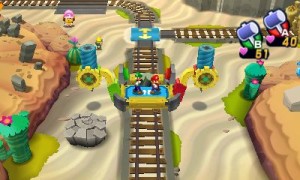 Finally, this epic theme sounds like something played in giant Luigi battles in the dream world.  It also reminds of Banjo Kazooie and Donkey Kong 64 for some reason.  Probably because the tone just seems a lot like that of the music played in the boss battles in said games, the overly ‘epic’, fast paced remix of the level theme thing.

And that’s all the music that’s available.  It’s pretty catchy stuff if I do say so myself, and I can already tell there’s going to be an absolute ton of themes I’ll be listening to time and time again when the games come out in June.  So what do you think of Mario & Luigi Dream Team’s music?  Is it good?  Any themes you’re interested in hearing when the game is released (in any region)?

Well, the reason why this music is so good is because it’s the same composer from the original Super Mario RPG on SNES, who’s worked on ALL the Mario & Luigi titles. Yoko Shimomura happens to also do the Kingdom Hearts music, too.