I was originally going to post about this game’s February 15th release date.  Unfortunately, Nintendo UK have now confirmed that it’s being released on the 30th of June instead, as can be seen on the mobile version of their online store.

Need more proof?  Here’s a picture of the game purchase page, as of the time of writing: 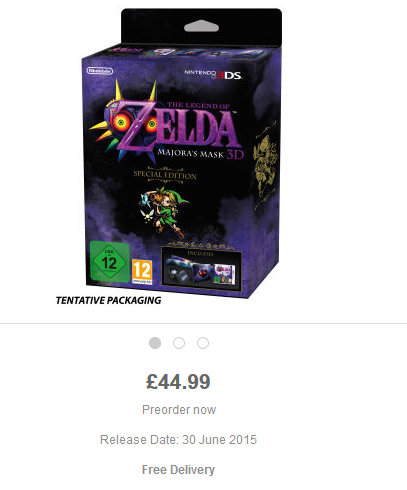 From what we can tell, this release date seems to be accurate given the ‘Spring 2015’ rumours and hints flying around.  And also, because this is Nintendo UK’s store we’re talking about, a website which actually managed to reveal the existence of Zelda and Animal Crossing DLC for Mario Kart 8 way before Nintendo ever intended to.

P.S. If you wanted to know what the page used to say, here’s a different screenshot showing the early ‘February 2015’ release date:

Considering how June 13th was “the first half of 2013” despite being near the end of the first half for ACNL, calling June 30th “Spring” sounds legit for Nintendo.

I’m sorry; this is just naivety. June 30th is the last day of June. Spring could be taken to mean the second quarter. It’s a placeholder date; if anything, February 15th is more likely to be the real one. Nintendo has delayed games before, so I think they said “spring 2015” so nobody gets their hopes up, and if it doesn’t get delayed people will be surprised and hyped.