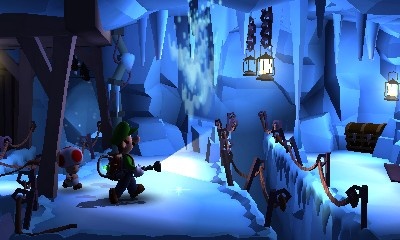 Just today, Kotaku interviewed Luigi’s Mansion Dark Moon creators Next Level Games.  And with that, they learnt some pretty interesting info about the game and why it was developed the way it was.  So here’s some highlights from their interview:

There was a conference call very similar to this one where it was kind of announced to us that we would stop working on what we were currently doing and start—they even added a little drum roll—to work on Luigi’s Mansion.

Or in simple terms, Nintendo knew the game was planned ever since the 3DS was, but Next Level Games didn’t. That must have been an interesting call, to suddenly get a message that Nintendo wants you to drop whatever you’re doing and work on a Luigi’s Mansion sequel for the 3DS system.

Additionally, the choice to release the game on a 3D capable console like the 3DS was definitely part of the plan.  Remember how people said that the Gamecube was going to be 3D capable system and that Luigi’s Mansion was meant to demonstrate this?  Well that seems to why Luigi’s Mansion Dark Moon was designed as a 3DS title, so Nintendo (and Miyamoto) can finally get to make a Luigi’s Mansion game in true 3D.

Here’s how Kotaku explains it:

The original GameCube director, Konno-san, explained what the 3D tests looked like using the GameCube hardware,  I believe there were some problems with 3D viewing technology then, so they didn’t keep working on it. But through that explanation we kind of reverse-engineered what the idea was. The first concept to come out was just using a dollhouse perspective, which is the camera kind of static on one side to just have Luigi running around in an environment to see how it would stand out in 3D. And we proceeded to [make] a tech demo and then a full on demo after that.

The bolded also seems to offer an explanation for something Kotaku hasn’t picked up on too.  Remember the camera in Luigi’s Mansion?  How the whole game used fixed camera angles?  Well look at the likes of Super Mario 3D Land and what do you see?  Fixed camera angles.  It’s to make the 3D effect clearer, and I guess Nintendo just kept the diorama look afterwards.

The interview also mentions that multiplayer wasn’t a foreign concept either.  Yeah, apparently that was planned for Luigi’s Mansion 1 at one point too, but didn’t make it into the finished game for whatever reason.  Hence the multiplayer in the sequel.  Here’s how Kotaku explains tha as well:

In the development of the first game there were actually [multiplayer] experiments done on the GameCube. Actually, Mr. Miyamoto had very positive impressions with how it worked but for various reasons it didn’t make it into the game. So when the development of this game started out, the director of the original game, Mr. Konno, had very strong feelings about definitely including multiplayer in this title. So multiplayer was a decision that was made from the very beginning of development.

Other interesting things they mention are:

And for why Luigi isn’t allowed to jump?  Here’s the best guess that Ikebata could come up with for why it was a rule in both the first game and this one:

Luigi’s Mansion [Dark Moon] is not so much an action game as it is an adventure game. With the limitation on jump, it helps stress the adventure elements of the game. And I imagine that the same reasoning went into the design decision to not let Luigi jump in the original Luigi’s Mansion.

Personally, I think this might have been a bit of mistaken decision.  I mean, look at Luigi’s Mansion 1 and the mansion design… then look at Dark Moon’s.  In the first game the decision made sense, it was a very realistic mansion layout where jumping would have been entirely redundant. But in the sequel, maybe they should have dropped that rule, since the likes of the Old Clockworks, Abandoned Mine and Haunted Towers seem a lot more designed in the style of a traditional platformer setting: 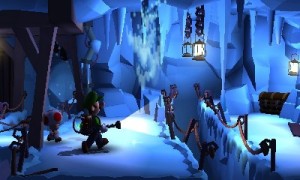 Apparently, the game was also delayed quite a few times too, as more features were added, as Miyamoto wanted more things worked on and the quality was improved:

Then the game was about adding value. Because the first game was notoriously short. And Miyamoto himself would play the game even a year into development and say, ‘No we need to keep adding more. Let’s keep experimenting with new gameplay ideas.’ So [there was] almost 16, 18 months of, I would say, prototyping phases of just let’s just try a slide game, let’s try ballooning, let’s try different things with the vacuum. We threw away a lot, maybe enough to make another game, but it’s that kind of commitment to experimenting that was trying to satisfy his need to add a lot of value to the game. And I think the multiplayer eventually ended up being that value-add component.

Throughout the three-year development time there were a number of points where we stopped and were like, ‘Well, we’re done. This is good to go.’ But there were places that we found that were good enough that we actually wanted to take advantage of them a bit more and expand upon those discoveries throughout the development. So that’s another factor as to why it took three years.

So that’s an interesting history Luigi’s Mansion Dark Moon has.  Want to read the rest and learn even more?  Check out Kotaku’s fantastic article here: