Yes, it seems another huge stash of Luigi’s Mansion Dark Moon concept art has been released just now, including new pictures of King Boo, the ghosts and all kinds of spooky scenes from the game.  So here’s literally all the artwork ever released of the title in one easy to find place:

First of all, the new concept art: 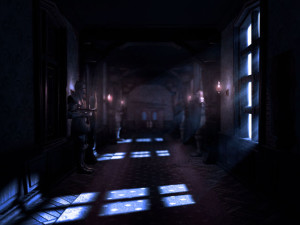 First of all, here’s one heck of a creepy hallway from the game, the one from the trailer with all the animated suits of armour.  Got to love those lighting effects here!

And here’s Luigi being chased by a whole of ghosts.  Yeah, this artwork also has a green shadow equivalent (seen later in the article), but this one is pretty cool too. 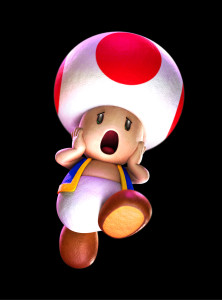 Here’s Toad, looking scared out of his wits again! As well as a creepy mansion silhouette. Reminds me all too much of Ghostly Galaxy from the first Super Mario Galaxy game. Some of the normal ghosts, looking cornered as if Luigi is just about to kill them. Here’s a piece of art showing a standard Boo.  Meh, not much to see here, it looks exactly as it would in any old Mario game. Here however is King Boo, looking as creepy as ever.  Seriously, looks like he’s back to his old Luigi’s Mansion 1 design again, with a demonic look as far attached from the generic ‘Boo with crown’ one as you can possibly imagine.  Here’s hoping Nintendo uses this version for Mario Kart 8. Luigi creeping around with a flashlight.  Looks good. Finally, here’s a far too corny looking blue ghost coming out of a vase!

But that’s not all of it!  Oh no, someone managed to rip the spider sprite/model from the game or trailer somehow, which can be found here: No idea how anyone managed to get that, but darn this boss looks pretty creepy with those spooky glowing eyes!

Oh, and here’s another thing.  More mansion shadows, this time hinting at the later levels of the game! But now for something else.  Here’s every single piece of concept art that’s ever been released of Luigi’s Mansion Dark Moon up to this point in time!  Yes, it’s a hell of a lot of pictures, so be warned that the below could take quite a while to load on a slow internet connection… Next, here’s every single region’s box art of the game. Yeah, the Japanese one is pretty small, but that’s the best picture anyone has of it. Finally, to top it all off, here’s a nice slide show video showing every single Luigi’s Mansion Dark Moon piece of artwork and resource found in this article along with some catchy music (both official and fan made):

Luigi’s Mansion Dark Moon sure does have some fantastic artwork, doesn’t it?

Can I use these pictures?

Author
CM30
Reply to  Can

Well, we don’t exactly own them. Nintendo just released them free for any one to use/any gaming sites to use.

So yeah, go ahead.