Is It Time to Return to the Purple Lunchbox?

Nintendo is all about unique gaming experiences. One could argue that the most uniquely designed Nintendo console of all time is the GameCube. The design was, of course, berated by gamers and media alike. A purple cube with a lunchbox-style handle on the back? Madness! And yet… truth be told, no video game hardware design has gotten as much attention, outside perhaps of the infamous PS3 Boomerang Controller. Could this be a case of “there’s no such thing as bad publicity,” and might it be time for Nintendo to dip back into that pool of bizarre creativity once again?

A Touch of History

When Nintendo officially announced the GameCube in 1999, it debuted as Project Dolphin with little more than buzzwords about the tech inside. Things remained that way until SpaceWorld 2000, when Nintendo finally unveiled the successor to the N64 in glorious fashion. It remains one of the greatest teaser trailers in video game history.

Interesting to note, they began as all game companies should: with the games. Though the trailer showcased virtually nothing in terms of actual gameplay, all their stars were there. Samus, Link, and a host of Pokemon graced the screen. Mario was represented in the Luigi’s Mansion segment. The big guns were firing in full force, and it lit a fire in gamers across the globe. No one with even a passing interest in Nintendo games could deny that this small video snippet promised huge things.

Then, with the crowd full of adrenaline, the screen displayed the first public image of the new console that would house these games. 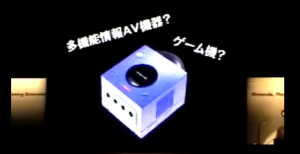 A strange purple and gray cube with a black plastic handle sticking out of the back. The audience fell silent. The roars of cheers from the highlight reel gave way to a chorus of crickets. Few people had expected anything like this.

Creativity is Not a Dirty Word

That wasn’t a bad thing, though. Nintendo is at its best when delivering the unexpected. Quite often with the Big N, the weirder the better. If the first image of the GameCube had been the Jet Black model, also available at launch, would it have had the same effect? It’s doubtful. It was the shock that drove people to talk about the console itself, rather than only gush about the teaser trailer (though there was plenty of gushing alongside).

Fast forward. In 2011, Nintendo announced the Wii U. Before a single game was show, we saw the controller, a massive rectangle with a screen in the center. The sizzle reel shown next began with a New Super Mario game we’d all seen before. From there we got Wii Sports Golf and Wii Fit. Beyond that was a focus on video chat and photo sharing – not even games at all. Finally things were brought back on track with a beautiful Zelda tech demo, but it was too little, too late. The contrast between this video teaser and SpaceWorld 2000 is astounding when you watch them side by side instead of a decade apart.

The Wii U console itself was shown. What did it look like? A rounded version of the Wii, which itself was as boring as a DVD player you’d pick up at WalMart. There was no creativity here, only tried and true modern lines void of soul.

Don’t misunderstand. The Wii U is a very well designed console, aesthetically speaking. The problem is, it’s boring. It doesn’t entice you to talk about it, one way or the other. No one ever said “Boy, have you seen that Wii U console design? That’s something else!” The GameCube made us talk. For better or worse, people gave their opinion about the little purple lunchbox.

Back to the Future

Today Nintendo stands on the cusp of debuting their next console, codename NX. Rumors swirl about what it might be. A hybrid console/handheld, perhaps, with detachable controllers. Maybe a new Mario game ready for launch. This chipset architecture, that chipset architecture, who knows? What no one has spoken of is if the console might be bright purple.

Nintendo has an opportunity here. They can certainly play it safe and give us the glossy white or black we’re all used to.

Or they can dazzle us. Yes, that dazzling may be a system shock, as an indigo cube once was, but we will see it and know it makes us feel something. Great art always makes you feel something, and the designers at Nintendo are master artists.

Does it have to be purple? Heavens no, it could be red. Or Tiffany Blue. Or shaped like a Yoshi skull with a place to insert discs in the mouth. Not a “special edition” released years later, but a unique and eye-catching design from Day One.

What would be most troubling is if Nintendo doesn’t embrace what makes them unique. Their originality. Their creativity. It’s long past time for them to continue standing on the same field as Sony and Microsoft. That field is gray and brown, pitted with bullet shells and worn down from overuse. Nintendo should wave goodbye to that place and head to a spot that suits them. A place where the grass is almost too green, and the hills have eyes.

This is who Nintendo is. This is what makes them special. Their next console should reflect that. And to those who think “The GameCube was a flop, why would you imitate it?” I remind you only this: The Wii U has sold far less. Playing it safe is a recipe for failure in today’s industry. It’s time to wake up those crazy designers of the GameCube days and tell the world you’re not interested in being like everyone else. It’s time to go back to the purple lunchbox.

What do you think about this idea? Is the wild GameCube a better model for the future than the stylish Wii U? Leave a comment below and chime in!

Interesting idea for an article. Have to admit, haven't thought much about the Gamecube's design in general, so it's nice to see someone mention that side of things. And yeah, I guess it would be a much neater design for a console than yet another Wii U. That said, I think if they're learning from the Gamecube, the more important aspects to focus on are: 1. Games. The Gamecube have some really nice and original games. Not enough to sell well on its own, but another Metroid Prime or F-Zero GX or Mario Sunshine would be more interesting than say,… Read more »

"The Gamecube have some really nice and original games. Not enough to sell well on its own, but another Metroid Prime or F-Zero GX or Mario Sunshine would be more interesting than say, another New Super Mario Bros."The issue is, NSMB sells more games and consoles than all those original games on the Cube. I'm with you, it's what I would like as well. I long for the originality of Chibi Robo instead of the creative-bankruptcy of Zip Lash. But would it be best for Nintendo's bottom line? I doubt it. There's a reason we're seeing more cash-ins now than… Read more »

Off topic, I always took a purple lunchbox to school for my lunches (this would be during the SNES/N64 era) :p

On topic, gamecube lacked games but still did better than Wii U.

[QUOTE="J.K. Riki, post: 142175, member: 5164"]"The Gamecube have some really nice and original games. Not enough to sell well on its own, but another Metroid Prime or F-Zero GX or Mario Sunshine would be more interesting than say, another New Super Mario Bros." The issue is, NSMB sells more games and consoles than all those original games on the Cube. I'm with you, it's what I would like as well. I long for the originality of Chibi Robo instead of the creative-bankruptcy of Zip Lash. But would it be best for Nintendo's bottom line? I doubt it. There's a reason… Read more »

On another note, I'm pretty sure the Gamecube was designed to be carried about like a lunchbox. Alas, that aspect never really got much use in most of the world.[/QUOTE]

It would have worked during the N64 era since many people took their consoles around since not everyone could afford a console and of course N64 party games were huge. But I think everyone had money by the time gamecube came rolling in.

I couldn't say if it was because everyone had the money for a GameCube, but I feel like the N64 was just more multiplayer focused. Maybe I'm wrong, but it seems that way from my (spotty) memory. I spent every day of my life during that time gaming split-screen with friends, where as that didn't happen nearly as much with the ol' Cube.A handle on the N64 would have been good! 🙂

That's because the cube lacked some serious multiplayer games.