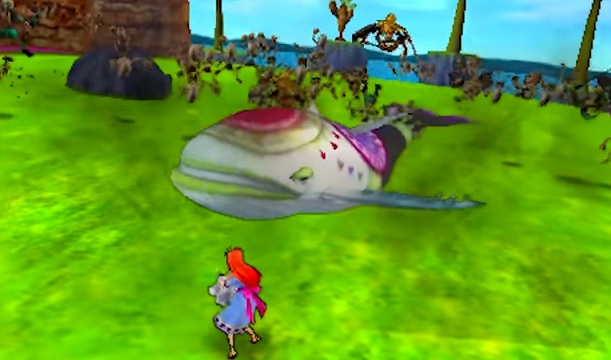 Well, it’s an update we’ve known about for a while now. None the less, Nintendo have finally released a proper trailer showing Marin, the Koholint Island level and various additions in this new update. Here it is:

So what can we see here?

Well for one thing, Marin looks like an amazing character. Oh sure, she was pretty cool based in the Game Boy game and all that stuff. But she also never actually fought anything in said game. As a result, I was kind of sceptical in regards to how she’d actually work in Hyrule Warriors.
But now, Nintendo have 100% proven how it’d work out. What’s more, they actually went above ad beyond by putting the Windfish in the game! Yep, now Marin’s attacks don’t just use the musical instruments, they call over the flying whale to wipe out everyone on screen!

Above: Behold the power of the Windfish!

Ad while not much of the Koholint Island level seems to be shown in this trailer, that looks pretty amazing too. Definitely nails the tropical vibe that the original game was going for. And hey, makes us want to see a full blown remake of Link’s Awakening in Ocarina of Time style!

The other stuff in the update is a tad less interesting. There’s Linkle’s new ability to wear boots and kick enemies to attack them. It’s a new idea, sure. But to be honest? I doesn’t seem like it’s going to work that well. Swords, magic abilities and sails simply have a better range than kicks, and can seemingly clear out a room full of enemies much better. Just look at the trailer; Marin’s attacks took out enemies much better and more efficiently than Linkle’s kicks did.

So yeah, we now have a great trailer showing Marin and Koholint Island in Hyrule Warriors Legends. The character looks great, the new area looks equally good and for the most part, all the other stuff just acts as a nice bonus on top of that.

Didn't think we get her as an character, still waiting for twinrova.

I'm so excited for that DLC. I didn't bother with the Wind Waker Pack or even play as Medli. This is what I've been waiting for most. I mean Link's Awakening is pretty underrated when it comes to hand held Zelda games. Even though I wasn't a fan of the ending. >_< Even still, I can't wait. Even though it's really hard to play HW after doing everything. I suck at keeping everyone equally leveled since I don't use everyone. 😛 Also it's interesting to see Linkle kick the crap out of everyone, literally, but really, I don't know. I… Read more »