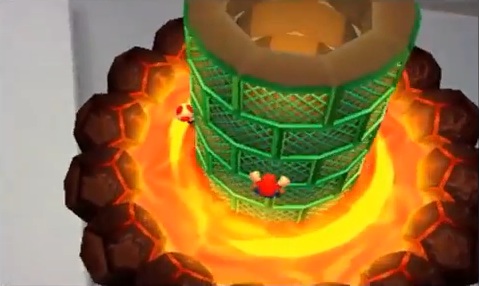 If you’ve been reading Nintendo 3DS Daily for a while now, you may remember that I wrote an article about how the 3DS’s AR features were going ignored by Nintendo and how so few games seemed to make any real use of them.  If you missed it the first time, you can read that article here:

Has Nintendo Give up on Augumented Reality Article

But now that Mario Party 3DS and this whole ‘Photos Together with Super Mario’ thing have been announced, could it be the case that Nintendo are finally ready to actually do something with the feature.  I think so, and I think that the way Mario Party is implementing this whole Augumented Reality business shows that Nintendo have quite a bit more confidence in it than they used to.

How is this?  Well look at this Mario Party screen and tell me what’s different about the whole AR setup used: 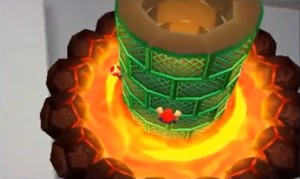 That’s right!  Actual moving characters and gameplay that seems like it’s based on button controls in an Augumented Reality generated scenario!  Prior to this, all AR stuff in Nintendo games was pretty much non interactive.  Oh sure, you could press buttons to shoot things or vaguely interact with the generated imagery, but every single game was basically done in First Person View with the 3DS itself being moved as your main control scheme.

This on the other hand seems to be different.  Mario and Toad are moved with the control stick and buttons on this net surface completely independently of how you move the 3DS.  Heck, it even seems like you’ll have to move the 3DS camera ‘around’ the virtual object to see them on the other side!  It’s seeming proof that actual GAMES can work with AR functionality, stuff that’s more than a cross between Pokemon Snap and a theme park shooting gallery.

So it could well be indication Nintendo is going to use AR for ‘proper’ games as well as mere ‘app’ like experiences such as Face Raiders or Pokemon Dream Radar. Something allowing you to controls characters seperate from the camera like the above mini game could be the preclude to all kinds of neat things.  Like making Super Smash Bros 4’s characters seemingly fight on your desk/bed/wherever like kid from the Nintendo 64’s game’s intro!  Or heck, use it for better versions of real life toys or something.  Can you imagine how cool it’d be to have a Lego game use this (or something like Minecraft)?  You could end up building virtual block structures and interacting with them like in a game world!  Complete with none of the mess or clearing up or awkwardness gained from the real thing!  Other great possibilities that await with this type of AR usage include a strategy game similar to Pikmin (seriously, can you imagine if someone used either Pikmin or that old Army Men license for something based around Augumented Reality?  Could be huge) and real life  Pokemon/Yugioh/whatever style battles that appear to be taking place in front of you in ‘reality’!  Just make both player’s consoles generate the same image through the camera and have what appear to be Pokemon Stadium style battles in your room/backyard/school!  That could seriously make millions…

But even ignoring the possibilities, you know the other great thing that having AR mini games in Mario Party 3DS and working on stuff like this Mario camera app proves?  That Nintendo haven’t given up on the feature like I’d feared.  That Nintendo might plan on implementing it in more of their recent games and actually try using it for some of the ideas listed above.  Either way, it seems my worries about Augumented Reality being abandoned may have been too premature and I’m very much interested in seeing what creative uses Nintendo can come up with for the technology!

OMG THE MINIGAME IN THE PICTURE, It is that lava minigame like the DS Mario Party.