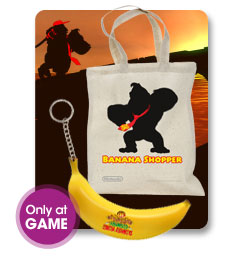 They’re not the same pre-order gifts as American retailers give away with the game, but unique shopper bags and keyrings instead.  Here’s a nice picture of the two bonuses you get for pre-ordering the game with them:

They do look fairly cool, but I still see no reason to pre-order the game just to get a few free gifts.  Maybe this will be more tempting for people living in areas with a lot of Nintendo fans where games like this might actually sell out quickly and hence there are multiple reasons to pre-order rather than just a few bonuses.

But what do you think?  Are you going to pre-order this title from GAME to get the gifts shown above? Or you just going where it’s cheapest/most convenient instead?