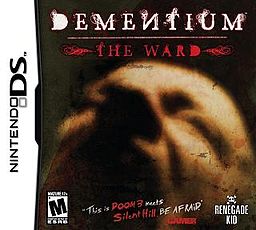 For those who don’t know, Dementium The Ward is a survival horror game by Renegade Kid, developers of Mutant Mudds and Moon.  Released for the original DS back in 2007, it was praised for being one of the genuinely few actual horror games released for the system, and was followed up with a sequel before the series seemingly got cancelled.

Well, it’s getting a 3DS port.  With a new save system and tweaked difficulty, the game is intended to be released on the 3Ds eShop in Q2 2015, with talk of its sequel getting the same deal a bit later.  There aren’t many details about it so far (it was announced in a chat between company co founder Jools Watson and Vinesauce), but there it is regardless.

So what do we think?  Well to be honest, we’re actually kind of excited about this game.  I mean, the 3DS doesn’t really get survival horror games all too often, and the eShop gets them even more rarely than that.  So it’ll fill a nice gap in the 3DS’ library, especially when its sequel (hopefully) gets the same treatment and a third game gets announced a few years from now.

Either way, it’s a game to look out for, especially if you’re a survival horror fan who missed out on the original all those years back.