Remember that iPhone game that used Yoshi as a playable character a while back?  The one which actually got them into trouble with Nintendo’s legal department?  Well they’re apparently changing their main character to remove the resemblance to Yoshi and avoid being sued.  Unfortunately for them though… they’re not doing a very good job.

What’s their new character design?  It’s a blue Yoshi with a hat!  In fact, you know what this reminds me of?  Boshi from Super Mario RPG.  Seriously, look at the resemblance: 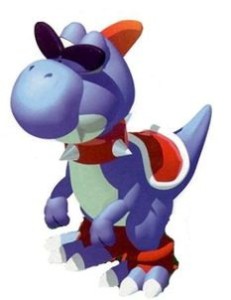 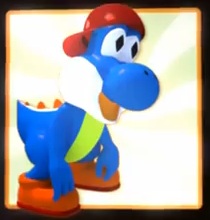 So not only have they now completely failed to redesign their character in a way that’ll avoid them being sued again (sorry, but recolourig a character and adding a hat doesn’t make them original), but they’ve unintentionally redesigned them in just the right way to make people think they’re ripping off a completely different Mario character…

Great job there!  I guess your idea about what makes an original character is roughly equal to that of your average Sonic the Hedgehog fan artist.

Oh, and in response to your comments that you plan to ‘redesign the character enough to satisfy Nintendo’…

Yes, and they did with rightly since the original Era was Yoshi’s character. The new Era is also similar to Yoshi but we are cooperating with Nintendo about the changes required by them but till that time the only thing that we could do is to re-color it, remove the carapace and some other parts and make some changes in “Eras” head shape.

How about just use a different character/character model altogether?  It’s not like you did much work in making this thing, you just downloaded it from an online database without checking that it wasn’t stolen.  Why not just go back to this ‘database’ and download a new character model?  Because what you’re doing now with the ‘changes required’ thing seems like a lazy attempt to avoid just replacing a stolen design.  Kind of like how all those stupid fan fiction writers try and merely change the names and publish it as ‘original fiction’.

So yes, they’re… ‘trying’ to redesign their main character to avoid being sued.  But they still completely fail to understand how copyright law works.

Original character do not steal.