Here are some new screenshots of Donkey Kong Country Returns 3D.  There aren’t many new ones (and out of those I just selected the ones I felt were interesting enough to post), but the ones here do seem to show off some of the new levels and items well. 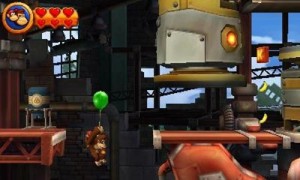 First up, here’s a factory level from the game where DK is using the new balloon item to recover.  I think it’s the level ‘Slammin’ Steel’ from the original, although I’m not quite sure. 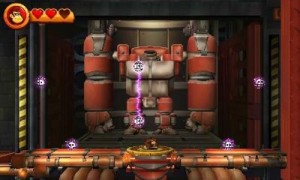 And here’s the level with the giant Donkey Kong robot being assembled.  Not sure how this whole area works to be perfectly honest.  Do you find pieces by clearing out rooms in the level?  Why is Donkey Kong building a giant robot anyway? 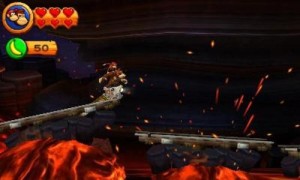 DK and Diddy racing through the level ‘Roastin’ Rails’ in the Volcano World.  As usual, whoever took the screens is playing in New Mode.  Wimp. 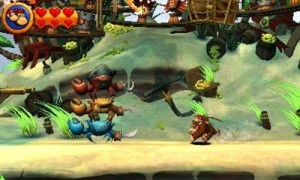 The Scurvy Crew boss battle in the Beach World.  This was already a ridiculously easy battle in the original Wii version of the game, so in New Mode it should even easier still.  On another note, am I the only one who was a bit disappointed by this fight?  All the other bosses were giant enemies with plenty of attacks who could do serious damage to the main characters… and then here you fight a bunch of barely more competent enemy crabs. 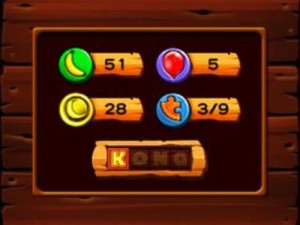 The touch screen menu. Not much to say here, other it’s a bit conveniant. 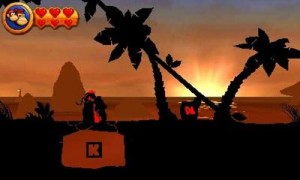 Behold, it’s one of those great sunset levels!  Not much seems to have changed in the transition from console to handheld, so let’s hope this great music hasn’t been ruined either: 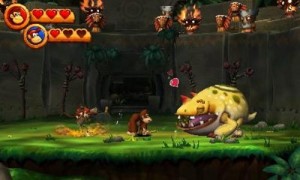 DK and Diddy fight the first boss Mugly.  Does anyone even know what this thing was meant to be?  The only thing he makes me think of is the dog from Wacky Races, and that’s based purely on the name.

P.S. Mario Wiki’s trivia for him is hilariously redundant:

According to the Prima Official Guide, Mugly is related to Thugly.

Well I never!  Two near identical looking creatures with similar names and attack patterns are related!  Who’d have thought it? 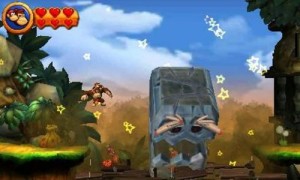 A Screamin’ Pillar comes crashing down in one of the new world 9 levels.  Is it just me, or does this one look bigger than usual?  Perhaps it’s just the smaller screen or zoomed in camera (or 3D effect abusing animation), but it seems like this level might introduce larger versions of these enemies too… 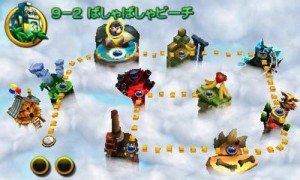 The world 9 map screen, in Japanese!  I wonder how close their translation is to the English names… 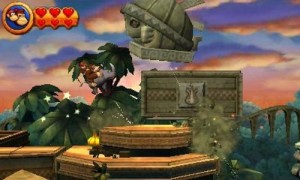 Rambi smashing through things in a level I can’t remember the name of.  God Rambi was fun to ride around on in Donkey Kong Country Returns, pity he was the only ‘real’ Animal Buddy to be found. 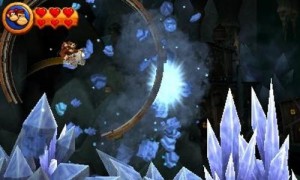 DK and Diddy come crashing through Rickety Rails in a giant wheel.  One of the best bits of the level to be sure. 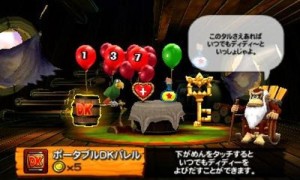 And here’s Cranky Kong’s shop.  Looks like the new items are in stock, although I have no idea what he’s actually saying about them…  Oh wait, someone mentioned it in a video on Youtube.  Here we go…

Crash into too many things, and even this stuff can’t save you.

Why are you falling into holes anyway?

This barrel is exactly what you need!

Yeah, I think his new dialogue is a bit… naff compared to some of the older stuff.  Maybe Monster Games needs better writers…

And there you go, some new screens of Donkey Kong Country Returns 3D showing various things from both the original game and which is new to the 3DS remake.  What do you think of these new screenshots and things?