Are 3DS and Wii U Games Getting Less Exclusive?

Back when both consoles were new, third party game developers were saying quite a bit about how they were releasing exclusive games on these consoles. There was Resident Evil Revelations, Castlevania Lords of Shadow Mirror of Fate, the upgraded Ninja Gaiden and all kinds of others, and we were generally told they were 3DS and Wii U exclusives that weren’t coming to other systems.

But has anyone noticed how almost all the ‘exclusive’ games third parties released for both systems have suddenly stopped being so exclusive now? How games that were supposedly designed purely for the 3DS and Wii U and meant to give ‘hardcore’ gamers an incentive to buy them are being ported to other systems left, right and centre?

For example, look at Resident Evil Revelations. Back a year or so ago, this was meant to be a 3DS exclusive, a new Resident Evil game to prove that such titles could work on a handheld. Now just under a year or so later, it’s being ported to every HD system under the sun (Wii U, Xbox 360 and PS3).

Above: Although at least the Wii U is one of the systems it’s being ported to.

Same with Castlevania Lords of Shadow Mirror of Fate, which is now all but confirmed to be getting a HD version sometime in the foreseeable future (aka the minute Nintendo’s ‘exclusivity agreement’ runs out).

And Ninja Gaiden Razor’s Edge? Despite the talk of that being a Wii U exclusive enhanced port of the original game, it turns out that it too is being ported over to and made available on PS3 and Xbox 360. 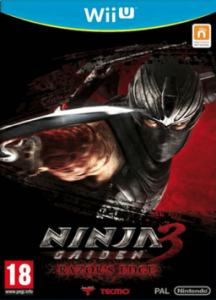 Heck, even the likes of Theatrhythm Final Fantasy are being made available on the Apple App store as an iPhone/iPad app. Guess it’s too much for Square Enix to keep it as a 40 dollar retail game and they’d rather sell it as a cheap ‘freemium’ title.

Above: From 3DS to app store, thanks Square Enix.

Seriously though, why are all the Wii U and 3DS ‘exclusives’ getting ported to over systems all over the place? Are we soon going to see the likes of Monster Hunter 3 and 4 ported over to the Vita like Famitsu predicted? Those other enhanced Wii U games like Batman Arkham City released on the other HD consoles? When did it become the likes of Microsoft and Sony who got exclusives and Nintendo didn’t? And isn’t this whole porting malarky simply giving people less of a reason to buy a 3DS or Wii U now they can just wait a few months for their favourite non Nintendo game to get ported to other systems?

What do you think about all this?

I think we are going to see more of this. I think exclusive is going to become a timed thing.

“Seriously though, why are all the Wii U and 3DS ‘exclusives’ getting ported to over systems all over the place?” I would say it’s about one thing only, and that is getting the games to the biggest audience possible (see: making the most money). I imagine that if the 3DS market was doing well for third parties, you wouldn’t see a developer like Renegade Kid porting over a game like Mutant Mudds to the PC first, then the iOS market. I can only imagine that the developers are making the decisions after seeing the sales for their games drop off… Read more »

@CoffeeWithGames I see what you mean, although I have to wonder what they’re expecting from the Wii U to be honest. The console’s brand new, it’s obviously not owned by too many million people and exclusives will be a risk, you’d think the third parties would have figured this out way earlier. As for the 3DS market, I’m not sure how anyone can say that’s not a good one. After all, it’s pretty much the best selling system of the moment and games Nintendo have released have sometimes even outsold their Wii equivalents. @Ashley You’re probably right. Such stuff did… Read more »