Unfortunately, due to real life reasons (mostly work related), I haven’t been able to comment much on the Nintendo Direct presentation recently.  So to make up for that, here are my thoughts on each point made in April 1st’s Nintendo Direct video:

I like the stuff shown.  The Animal Crossing track looks pretty darn awesome, especially with the whole changing seasons gimmick:

Add Mr Resetti as a Monty Mole replacement (yes really), and Bells replacing coins, and it’s kind of a major win for any Animal Crossing fans out there.

Aside from that, 200cc looked rather cool.  I liked how much faster the game seemed to be with it, and from the videos I’ve seen online, it actually makes the game more exciting than just about past Mario Kart title through the increased speed alone.  Just look at this and tell me it isn’t awesome:

Maybe Nintendo should go even further.  Like, scrap 50cc altogether and have future games start at 100cc.  We really don’t need a super easy ‘moron mode’ in future Mario Kart games, especially given how generous the items are.

In Regards to Smash Bros 4

For the Super Smash Bros announcements, I was mostly pretty pleased.  Mewtwo seems like a nice enough DLC character:

And Lucas was pretty good too…

But neither of them compared to the best Smash Bros announcement of the Direct.  Yes, the character poll.

I absolutely love that idea.

I mean, we’re voting for who we want playable in a Smash Bros game, and after release too.  Given Sakurai’s complete unwillingness to use any real logic in picking characters and some of the awesome ideas thought up by the community, I just cannot wait to see what awesome characters get announced thanks to fan votes.

I’ve already voted K Rool, and I’ll have votes up for as many Wario characters as I can before the end of the week.  For the sake of Super Smash Bros and Nintendo, I’d advise you all to do the same and go here:

There’s also some stuff about Mii costumes, but I didn’t care much about that.  Neat enough designs, but Miis are the least interesting characters ever featured in a Nintendo game.

The game looked decent enough, but to be honest… it doesn’t seem to be the kind of game I’m interested in.  Maybe because first person shooters were never really much of a thing for me, and at its core, this game is another FPS.

That said, I hope it does well, if only to see a major new Nintendo franchise in the 21st century (and to see all the ‘Nintendo has no new ideas’ idiots shut up for a minute or so).

Both look okay, although StreetPass Zombies looks much more interesting than StreetPass Fishing.

Besides, the Zelda series did fishing much better, especially in Majora’s Mask 3D:

Besides, we can’t fish in StreetPass world while wearing the Fierce Deity Mask, can we?

On another note, I do wonder why they even bother with StreetPass outside of Japan.  I mean, unless you live in a large city with a decently sized Nintendo fanbase, you’re pretty much never going to get a ‘hit’.

This is especially true of the UK, which Nintendo should pretty much just give up on altogether (we seriously don’t seem to be anywhere near as interested in Nintendo games as people in the rest of the world). 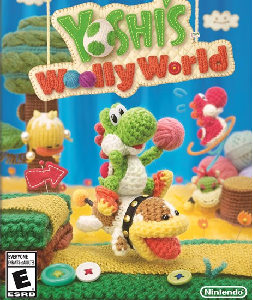 Wonder if we’ll get a giant yarn version of Baby Bowser, like in the final battle of the original Yoshi’s Island?

This game, looks fairly decent.  I like the variety in enemies now, given the presence of Chain Chomps, Wigglers and Thwomps among others.  And the fact it has themes for Super Mario Bros 1, 3, World and New Super Mario Bros U is certainly a big improvement on the two style version shown originally.

But I’m probably not gonna use it too much.  I might buy it, just because a Mario level editor needs to be supported.  But Lunar Magic just blows it out of the water before it’s even been released, and I plan to mostly stick with fan made level editors for the foreseeable future.

Looks okay, although not exactly my cup of tea.  Maybe I’ll try the game sometime in the future, when I’m bored enough to have literally nothing else to play.

Meh.  We got a better deal from the Masterpieces in Super Smash Bros Brawl, and they were pretty crap too.

But seriously, it seems like everything that’s been done with Amiibos has already been done better with the e-Reader.  You had the full games unlocked by buying the cards.  You could use them in other games for interesting content (including whole levels, powerups and expert videos) and they looked a hell of a lot cooler when scanned into the GBA.

So what does the Amiibo thing do better?  Look cooler on the shelf?

Above: Forget Mii costumes, getting whole new levels by scanning cards is where it’s really at!

Didn’t get to see much of this one due to the time, but… it doesn’t really interest me all that much.  Then again, as good as the games probably are, neither does Animal Crossing in general.  Never got the appeal of ‘virtual life’ games.

Now, if they had an unlockable hockey mask and chainsaw mode… that might be more interesting.

Looks cool.  Nice to see an actual full game get announced in a Nintendo Direct, especially one like this.

On another note, is it me or does this game look really, really nice for a Fire Emblem title?  Okay, Awakening was a step up from previous ones tech wise, but… this seems quite a bit beyond that.  Definitely come a long way since the days of 16 bit graphics viewed from above.

Donkey Kong 64 and WarioWare Touched are on the Wii U Virtual Console?

Am I dreaming?  Are Nintendo really advertising a Donkey Kong game and a Wario game as the launch titles for their redone retro game service?

That’s pretty cool.  Especially given how Donkey Kong 64 was initially thought lost forever due to the Jetpac minigame.  Oh yes, apparently that returns.  The bit where you play Jetpac for a Rare coin has been included untouched.

Above: This brings back memories of Rare and the good old Nintendo 64 days!

Above: More great memories for Wario fans.  This was also the game that first introduced the character Ashley, featured as an assist trophy in Super Smash Bros for 3DS/Wii U.

There were some indie games announced for the eShop, but to be honest, I can’t really remember any of them and I don’t have much interest in playing any of them either.  Seems like the types of indie games usually released on Nintendo systems are a bit too ‘niche’ for my liking.

Either way, it was a decent enough Nintendo Direct.  Not a ton of major new game announcements, but I’d say the idea of a Smash Bros character poll and the fact Nintendo actually remembers both WarioWare Touched and Donkey Kong 64 definitely makes up for it.

What did you think of the Nintendo Direct a few days ago?

The announcement of the character poll was great!
K Rool would be an interesting character for Smash bros! I voted for Zack & Wiki because I think this duo has a lot of potential for being a Smash Bros character. Zack could attack with Wiki as a bell or with one of the many items of the game and he already has enough taunts 😉

Zack and Wiki? That’s an interesting choice. Aren’t they from a Wii game that came out a while back?