In Japan at least, according to a now removed piece of information from the Japanese official site.  Here’s a screenshot showing how the page used to look with the date highlighted (from Silicon Era): 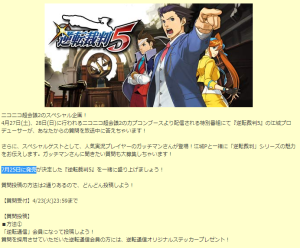 Above: Screenshot from Silicon Era

So that seems to be the game’s Japanese release date.  Will the game coming out this year mean there’s a chance of Ace Attorney 5 getting a Western release sometime in late 2013/early 2014?

What do you think of Ace Attorney 5?