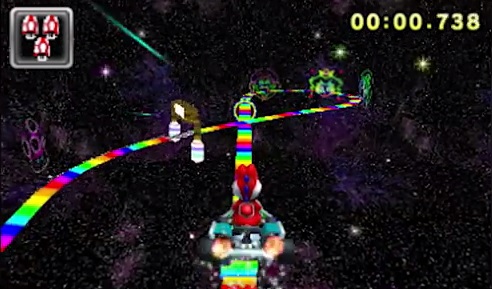 Think 200cc is pretty fast in Mario Kart 8? Wonder what it’d be like if Mario Kart games let you race at near F-Zero speeds instead of the somewhat slow ones present in the actual games? Well if so, it seems like the hacking community has you covered. Behold, what is apparently a 9000cc cc speed hack for the 3DS Mario Kart title, as demonstrated on Mario Kart 64’s Rainbow Road track:

It’s pretty damn fast to say the least. See that first part of the track? Yoshi just flies over it like a jet plane at this speed, and only just about stops at the wall at the other side. And just watch him go at the end, the poor guy flies so far after finishing that he ends up blasting out of the solar system/galaxy/known universe as a result! Guess this sort of thing would certainly make Mute City and the Blue Falcon kart somewhat more accurate to the source material!

The mod used to be found here, with additional 200c and 500cc settings:

So, yeah. Eat your heart out Nintendo, 200cc is nothing compared to this!