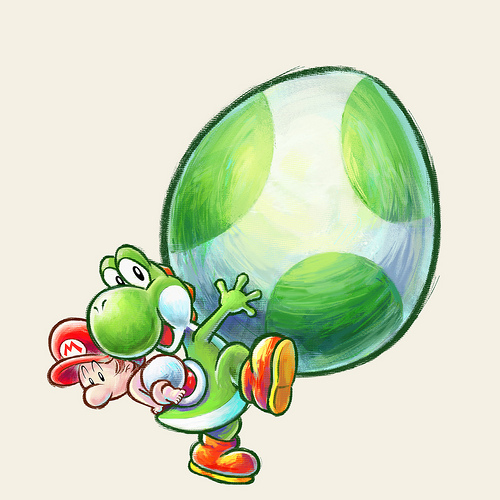 Well, this is certainly an unexpected piece of information!  Basically, Nintendo’s Takashi Tezuka has confirmed in an interview about the Yoshi series (and Yoshi’s Woolly World) that the Yoshi series takes place outside of the Mushroom Kingdom.  Here’s the relevent part in Game Informer’s interview mentioning it:

Tezuka: Yoshi’s universe, both in the Yoshi series as well as the yarn Yoshi world in Yoshi’s Woolly World, is separate from the Mushroom Kingdom. There’s not really a link between.

So in other words… Yoshi’s Island, Yoshi’s Story, Yoshi’s Topsy Turvy, Yoshi Touch and Go, Yoshi’s Island DS, Yoshi’s New Island and Yarn Yoshi don’t take place in the Mushroom Kingdom/World. And while this does explain a few things that no one really cares about (like why Blarggs look so different in the Yoshi games and the mainstream Mario ones), it also makes Mario’s backstory… convoluted and confusing as hell to say the least.

You see, Mario and Luigi were born at the end of the original Yoshi’s Island and delivered to a house in the same world/area as the one in that game:

But then in Yoshi’s New Island, it turned out the stork got the wrong house and they ended up somewhere else, presumably also in the same world/location:

But… Mario then started living in the Mushroom Kingdom, also as a kid.  That’s how Mario & Luigi Partners in Time happened:

As well as you know, every sports game known to man.  Baby Mario and Luigi have appeared in Mario Kart (including Double Dash, Wii and 8), Mario Tennis and Mario Golf.

They then apparently ended up in Brooklyn for Donkey Kong and Donkey Kong Jr, before somehow coming back to the Mushroom Kingdom after Mario Bros (that weird arcade game you got with Super Mario Advance 1-4 and Mario & Luigi Superstar Saga).

So now we’re meant to believe they’ve gone dimension hopping three times before they were about five years old.  That’s sure to cause havoc for anyone who actually cares for a Mario timeline…

But what do you think?  Are you happy about this ‘reveal’ that the Yoshi series doesn’t take place in the Mushroom Kingdom?

I am still unsure if they just discredit being part of the same kingdom or if by world they mean universe.It is interesting as it opens some plot holes. Then again like you said, it is not like these games ever tried to make sense in a thoroughly-cared-for timeline in the first place.

That is true. But, Mario Games, We can see the island be much different from Yoshi’s ISLAND. That is also the reason how Yoshi’s Universal Gravitation, Yoshi’s Story, and Wooley World are never mentioned like games that do take place in the Mario Universe Such as Luigi’s Mansion. The Stork did get lost and if that put him in a Different universe then that is fine by me. That does mean That Kamek, Baby Bowser and Yoshi can travel through universes. And yes universe. A Dimension is a plane of living in a universe. And they specifically said universe.