As another way to celebrate the 30th anniversary of Super Mario Bros 1, Nintendo are going to release a soundtrack CD with various songs from the many games in the Mario series. 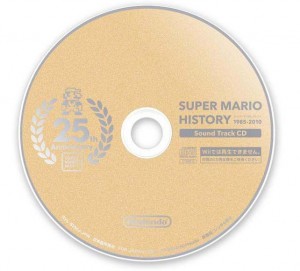 Above: Best to forget this one ever happened…

But unlike last time around, where the song list was literally half sound effects, this one seems to have a tad more variety. Behold, the full list of games that songs are being taken from this time around:

In other words? They’re representing the entire series, even down to the more obscure ones like the Super Mario Land series and Super Mario Sunshine. Definitely a far cry from such ‘imaginative’ tracks as ‘Mario gets a 1-Up sound effect’, isn’t it? Either way, it’ll be released on the 13th of September for 3,240 yen (about £17 or $26) and will come on two full CDs.

But what do you think? Is this a soundtrack you might be interested in buying? And on a similar note… are there any great Mario songs you’re desperate to see used in a soundtrack like this? Cause we’d like the ruins theme from Super Mario Land ourselves…

I like this list, however, I have one small gripe. It is a shame they keep celebrating SMB but keep disregarding the original Mario Brothers that started the ball rolling. They don't even have that on the list of songs, I see. Granted it was Atari 2600 and such, but it still had music and was ported to several games such as the GBA SMB Collections and SMB3, as well as Animal Crossing on GC in America.