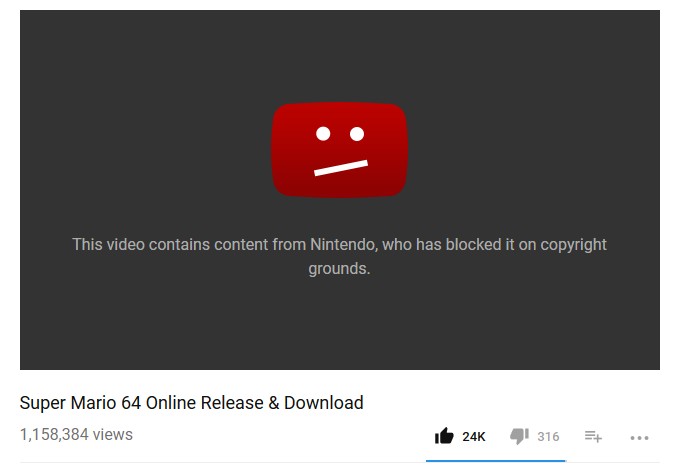 Over the last few years, we’ve seen a lot of fan projects get taken down by companies like Nintendo. There was AM2R, which was taken down prior to Samus Returns being announced. There was Project M, which suspiciously ceased development in late 2014.

And with everything from Super Mario Bros X to Pokémon Uranium being affected at one time or another, it’s quite clear the company is more defensive about their IPs than they used to be. Heck, there are so many examples we wrote an article about all of them in 2016!

So, with Super Mario 64 Online hitting the spotlight, it’s quite clear Nintendo wanted it removed from the internet. Hence, they tried to get it taken down.

Yeah, note the wording there. They tried.

Unfortunately for them however, Super Mario 64 Online doesn’t really include copyrighted content in it. Instead, the download is merely an exe file which launches the online functionality.

As a result of this, there’s not much Nintendo can do about it. The program simply doesn’t contain their intellectual property, and merely patches it to a ROM on the fly rather than providing a game for anyone to directly open and play.

So, while they did manage to take down the launch trailer, that’s all that happened. The links to the download still work. The website and forum is fine. Heck, even the other videos of the game on Kaze’s channel are still up as of this article.

It’s a pretty good result all round, at least where fan works are concerned.

but the name ‘ Super Mario 64 Online’

If he called it Super 64 OMline then maybe.