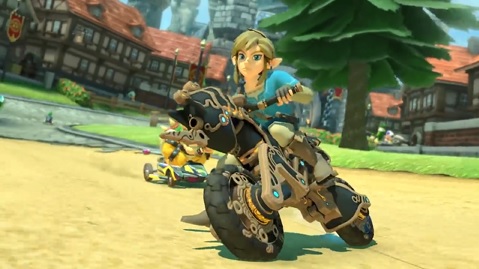 A couple of days ago, Nintendo announced that Mario Kart 8 Deluxe would be getting more updates. It wasn’t a huge announcement and it wasn’t made clear exactly what said updates were, but it was an announcement none the less, and hinted that Nintendo’s support for earlier online games would resume along with the Switch’s paid online services.

But now, it seems we know exactly what kind of updates we’re getting. Why? Because Nintendo have just announced (and released) a brand-new update based on The Legend of Zelda Breath of the Wild. This update brings a new version of Link to the game, along with vehicle parts based on the Master Cycle Zero from said title. Here’s a trailer for the update showing the new additions:

As well as some in-game footage courtesy of TWD98 on YouTube:

As you can see, it’s… actually all surprisingly accurate to the Breath of the Wild setup given it’s a Mario Kart 8 Deluxe update. Seriously. Not only does the vehicle look identical to the version found in said game, but it even seems to control mostly the same too. High speed plus low drift and high traction? Yep, those are the stats for the Master Cycle Zero alright, and they match its handling in BoTW to a tee.

Unfortunately, while those stats are mighty impressive in a medieval fantasy world, they’re a tad less impressive in a modern kart racer, and mean the new vehicle is probably not going to be setting any world records anytime soon.

Still, it’s fun to play around with, and it’s an impressive first update for a game like this one, especially given its entirely free and given to us almost entirely by surprise.

So, go and mess around with it if you’re interested. It’s a neat new vehicle setup, and one that makes Mario Kart 8 Deluxe all the better by existing!