A New Kind of Mario Game is Coming in a Year or Two?

It’s only been three years since Super Mario 3D World, but it seems like we’re already about to see the next Mario platformer! Here’s Shigeru Miyamoto’s comment about a new Mario game, straight from a recent IGN interview:

we’re always challenging ourselves to create something new, so hopefully you’ll see a new kind of Mario in about a year or two.

Maybe next E3 we’ll be able to share something.

So what is this ‘new kind of Mario’? Well, the Nintendo fanbase has been kind of split in regards to that question.

On the one hand, some people are thinking it might be something akin to a Mario 64 style 3D platformer. You know, more open levels with multiple stars to collect in any order, except with shiny HD graphics. Which makes sense; there’s certainly demand for that sort of game now.

However, it’s not the only possibility. For example, could this mean another genre hybrid instead? Like a Mario First Person Shooter or a Mario Action Adventure akin to the Zelda series? Maybe, it’d certainly be a ‘new kind of Mario’.

It’s also quite possible that it could refer to the content or tone instead. Perhaps its an ultra violent M rated Mario title. That’d be pretty original, at least for an official Nintendo game. Or maybe it just drops most of the current characters (Peach, Bowser, traditional enemies, Toads) and introduces a whole new setting. Imagine seeing Mario get a full blown dark reboot!

Or it could just mean a few new powrups or stuff. After all, one of Miyamoto’s previous quotes about the future of Mario was:

Who knows what Mario will look like in the future? Maybe he’ll wear metallic clothes!

And lo and behold, five years later we got Metal Mario: 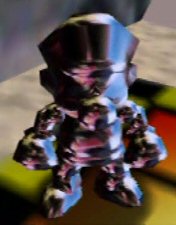 So anything could happen here. Anything from a full blown Mario reboot to an extra power up or two in a traditional Mario platformer.

But what do you think? What is this ‘new kind of Mario’ that Miyamoto is referring to?

I find it funny that they say they strive for new and different and yet release tons of mario clone games.