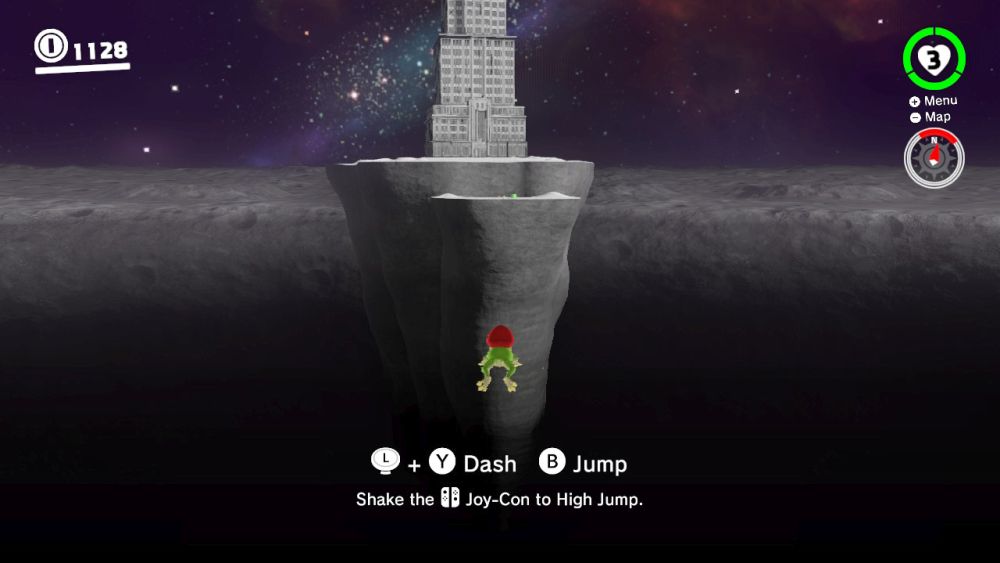 In Super Mario Odyssey, there are various postgame kingdoms and areas you can explore for extra Moons. These include the Mushroom Kingdom and its Mario 64 shout outs, the Dark Side of the Moon and its boss rush plus numerous extra ‘Moon Pipe’ secret courses added throughout the game worlds once you break the Moon Rocks.

However, the toughest (and final) one in the game is the Darker Side of the Moon. Set in Culmina Crater, this level is a brutal test of everything you’ve learnt throughout the adventure, with tons of long sections based around every transformation and gimmick in the game. It’s like the Grandmaster Galaxy, World S Crown or Champion’s Road of Odyssey.

But what if you’re not good enough for that? Or just can’t be bothered to go through the 13-section gauntlet for a single Multi Moon?

Well as it turns out, you’re in luck. Because there’s a handy glitch in the game that lets you skip the entire level! Here’s a video showing how it works from our YouTube channel:

As you can tell, the method to pull it off is as follows:

If done right (aka within a few frames), you’ll somehow end up swimming in the air. Once that’s a thing… well, you can guess what to do. Just swim over to the building at the end and hey presto, the level is done.

It really is that simple.

And it turns the equivalent of Champion’s Road into a complete and utter joke. It’s not the only way either.
Oh no, you can also use Dorrie to do the same thing if you’re careful:

So yeah, if you’ve got slow reflexes, that way might work better for you. Either way, the results are the same. One tough level, made completely trivial in a matter of minutes.

It’s definitely one to try for you Super Mario Odyssey fans out there!