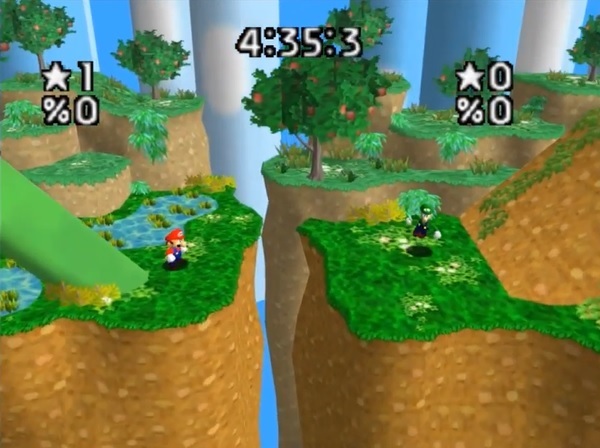 When it comes to Super Mario 64 hacks, it really does feel like we’re in a new golden age. We’ve got Kaze Emanuar recreating mechanics from Super Mario Odyssey and Mario Maker in the engine. There’s a full blown online multiplayer mode with multiple selectable characters.

And with things like whole game worlds being imported as levels and Ocarina of Time being remade as a Mario hack, it’s quite clear we’re seeing the title pushed further than ever before.

But even with all that said, the latest Mario 64 mod that’s been released is something else entirely. Why?
Because it’s a full-blown Super Smash Bros game created as a Super Mario 64 hack! No, we’re not making that up:

Named Super Smash Bros 3D, the title is the latest Mario 64 hack from SKELUX, the creator of Super Mario Star Road and the special level importer that allows ridiculously large stages to be imported into the game. As the title suggests, it’s an attempt to translate Super Smash Bros mechanics to a fully 3D environment, with players able to go anywhere they like in stages and attack each other from any possible angle.

And well, it’s already looking incredible right now. Indeed, not only are there multiple stages to choose from (including some from Melee), but actual online multiplayer so you can play against people on the other side of the world. That’s utterly ridiculous, especially given how its based on a single player only game.

However, it’s SKELUX’s future plans which will really make it shine. Why? Because future additions coming to this game will include:

As well as four player support on top of all that.

This means we’ve already gone from a 3D platformer with no multiplayer functionality in sight, to a complex fighting game with completely new mechanics and features.

It’s absolutely insane, to the point of perhaps being one of the most ambitious N64 game mods ever made.

So, if you’re a Smash Bros fan, check it out. It’s a nice look at how the series could work in 3D, as well as one of the craziest technical showcases I’ve seen in a while.