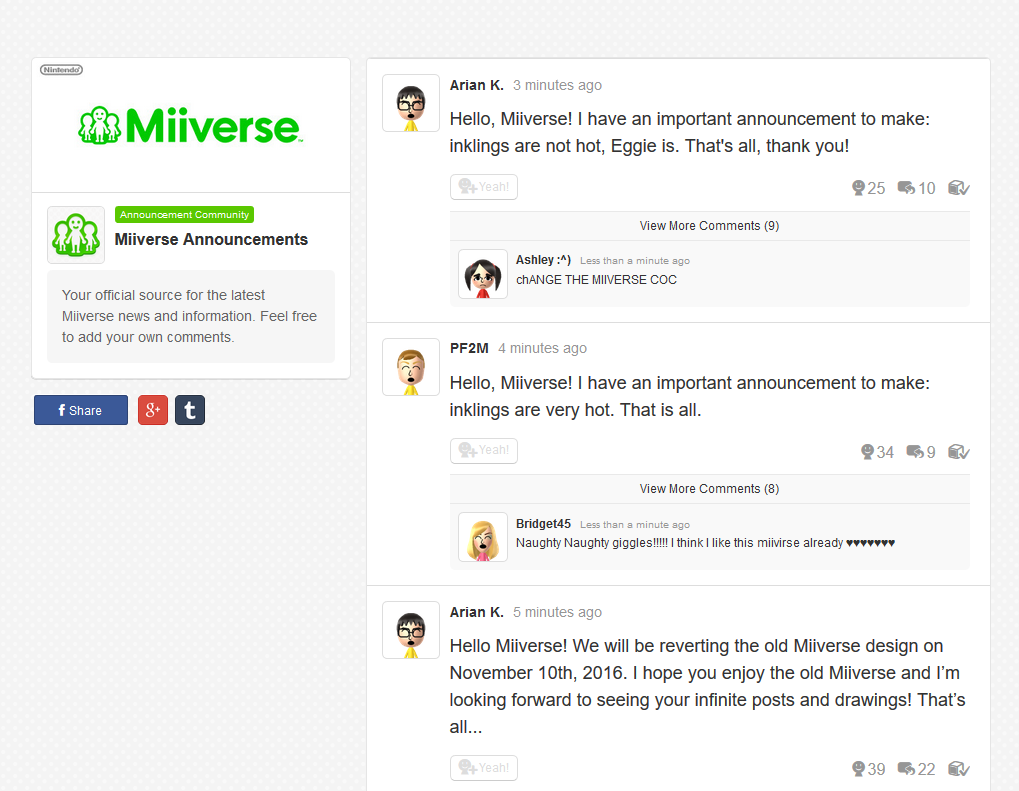 Over the last few years, Miiverse has gone through some… ‘interesting’ situations. We’ve had situations where users could post anything due to bugs in Nintendo 3DS games. There have been cases where new games have been leaked in advance due to the system having sections for them.

And as of earlier today, the service was hacked. Indeed, at roughly around 12AM GMT, a couple of users known as PF2M and Arian K seemingly managed to get admin access on the site, spamming the announcements with joke topics as a result. You had comments about TV ads and Billy Mays. There were random posts about the Inklings being ‘hot’. Heck, there was even an ‘announcement’ stating the site’s design would be reverted to the old one.

It was chaos all round. Short lived chaos (it was cleared up within hours), but chaos none the less. Here’s a picture showing what happened:

Fortunately though, that’s all it was. Why? Because as bad as the whole hacking ordeal was, it was only a couple of kids messing around and making jokes. They weren’t jokes Nintendo wanted, sure. And they did make the company look a bit less professional.

But it wasn’t a criminal gang or blackhat hacker who did the deed. If it was, the old Miiverse database would have likely ended up on a dark web auction site and every single user on the site would have had to change their passwords as a result. To have it be the work of a bunch of bored trolls was probably the best case scenario for a crisis like this.

Still, let’s hope Nintendo’s looking into this, and figures out how to stop anyone else getting admin permissions for the site. Because if a bunch of kids can seemingly do this, there’s a very real chance a bug exists for less savoury actors to exploit as well.

But what do you think? Did you find today’s happenings on Miiverse ‘funny’? How do you think Nintendo can prevent screw ups like this in the future?