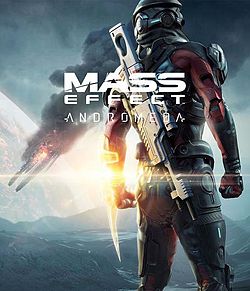 So here’s the official trailer for the game, by developer Bioware:

As you can see, it’s only a short trailer, but it certainly reveals quite a few interesting plot details none the less. It follows the Pathfinder (the game’s protagonist) as he wakes up after hundreds of years of travel in a galaxy where humans are seen as an alien race.

From here, he has you use the Starship Tempest to explore the galaxy and find a new home planet for humanity to colonise. Which in turn leads to the usual open world gameplay of the Mass Effect series, except in a different setting.

And Bioware has revealed some other interesting details outside of the trailer too. For example, the Loyalty Missions (which were absent in Mass Effect 3) return in this game. There are both Deluxe and Super Deluxe editions of the games too (for the collectors among you). And a more detailed gameplay reveal will be shown at the Game Awards this year.

So there’s plenty of information out there, and even more will be coming soon.

But what do you think about it? Are you excited for the prospect of a new Mass Effect game? Or are you a tad worried after Mass Effect 3 messed up the storyline found in the first two games? Either way, post your thoughts on the game at the Gaming Reinvented forums today!

Cool!  I've played 2 and 3.  All three are included in the streaming pack I'm thinking of getting for $5 a month.