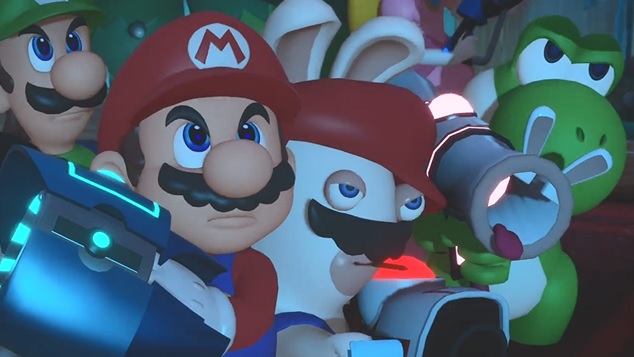 Back at E3 2017, Nintendo and Ubisoft announced Mario & Rabbids: Kingdom Battle. A quirky crossover between the Mario and Rabbids franchises, the title aims to mix the strategy gameplay of something like X-Com with the humour of a Mario RPG. It’s a quirky setup, and certainly makes the game stand out from all the other Mario spinoffs out there.

Which is only reinforced by the latest trailer! Here it is, straight from their official YouTube page:

As you can tell, it’s… got a very creative way of presenting the title. That’s because instead of just being a few clips from the game with generic background music, you’ve got a villain called the Phantom of the Bwahpera singing an opera song about the game and its mechanics!

And boy does it bring the parody aspect of the game to the forefront. Seriously, just listen to lines like:

You’re so not worth the hassle. Your Princess is in another castle!

And tell me it’s not gently mocking the conventions of the Mario franchise. That’s pretty awesome really, especially given how said humour is exactly why I’m such a fan of Paper Mario and Mario & Luigi. Because their level of self awareness really makes the games stand out more.

So yeah, it’s nice to see the Mario/Rabbids crossover will follow suit there.

Still, enough about the presentation for a minute. What about the actual gameplay?

Well, that looks pretty good as well. Okay, it’s not gonna blow people away if they don’t like strategy games. And yes, it’s not exactly a direct copy of Mario & Luigi or Paper Mario.

But it’s a really fun looking game none the less, with the quirky characters, weapons and maps making it feel like one of the more fresh Mario spinoffs in years.

So go check it out if you haven’t already. It’s exactly the sort of thing the franchise needs nowadays.