Lovely Warriors of Friendship was Submitted to Steam Greenlight?

For those who haven’t heard of it already, Lovely Warriors of Friendship is an… interesting crossover fan game based on My Little Pony Friendship is Magic.  With characters and story concepts based on everything from Doctor Who to Wario Land to Mega Man and Pokemon, it’s basically a low rent Mushroom Kingdom Fusion clone with all the ambition and about a tenth of the production values.  Basically, it’s your typical over the top fan game.

But apparently, someone out there… had their hopes set a bit too high.  Why? 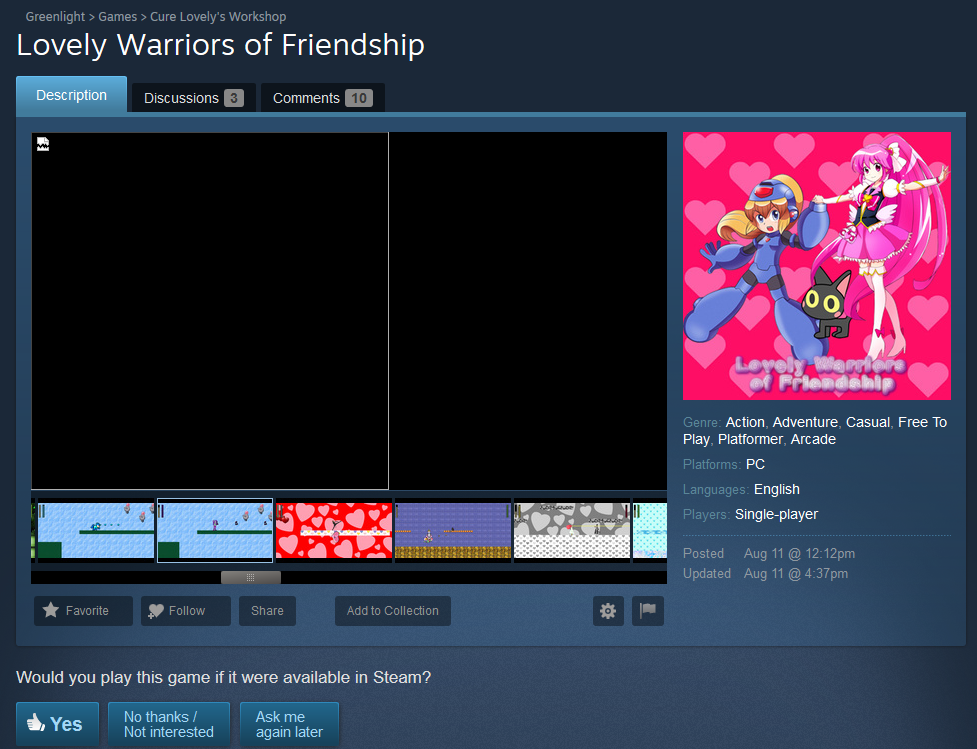 Above: Yes, this actually happened.  You can tell from the pictures alone that this is not going to pass quality control…

Because in a baffling as heck move, they actually submitted the game to Steam Greenlight.  Yes, because as we all know, a mega crossover with about fifty series represented is going to last so long on a paid service when absolutely no permission was gotten from anyone involved in the IPs that make it up.   Or when the whole game looks like it was made by a beginner in a basic game maker type program:

Above: Lovely Warriors of Friendship sample screens from Bianca Games.

The end result was pretty much exactly as you’d expect; the game got taken down via DMCA notice about three minutes after it ended up mentioned on Reddit and other popular social sites.  Maybe because someone at Hasbro (or another one of those companies) realised it wasn’t a good idea to let any old Tom, Dick or Harry profit off their work by trying to sell an unathorised fan crossover on Steam.

Either way, don’t try and sell fan games on Steam.  Or anywhere else for that matter, since selling the equivalent of fan fiction is even more legally grey than releasing it for free in the first place.

What do you think about this example of utter lunacy?

An Amusing Video about the Game and Steam Greenlight…