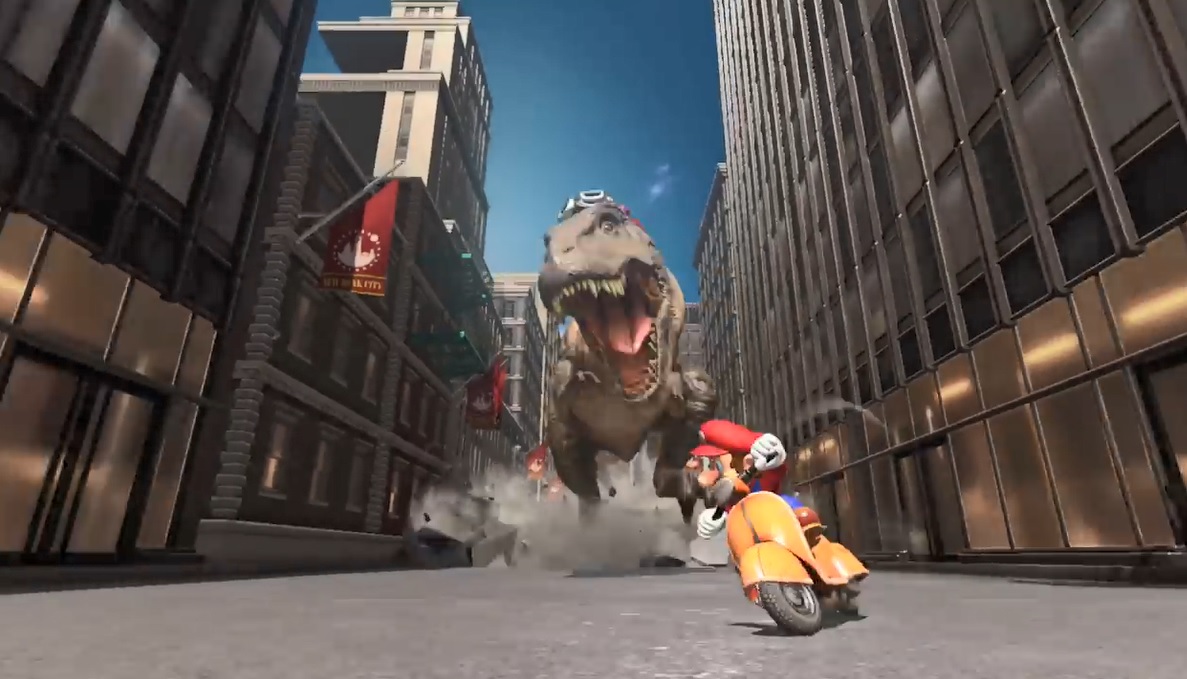 Over the last few months, there’s been a lot of footage for Super Mario Odyssey released. It’s been shown at E3 and Gamescom. It’s gotten live updates on social media for weeks.

Hell, even the Nintendo World Championships featured it prominently this year! It must be one of Nintendo’s most heavily advertised games ever.

But now there’s even more footage to add to all that! Yep, thanks to Nintendo Co Ltd advertising the game in Japan, we’ve now got tons more footage of the game, complete with clips of all new levels and bosses! Here it is, courtesy of GameXplain on YouTube:

As you can tell, it starts off pretty damn strong. Indeed, out of all the ads included in this video, the first one seems to have the newest content of the lot. Like for example, this clip of Mario jumping over all the people in New Donk City:

Why’s he doing this? Well, maybe it’s something to do with the situation at 18 seconds in. Where Mario is stuck fleeing from a T Rex (yes, in the middle of New Donk City) via a scooter: 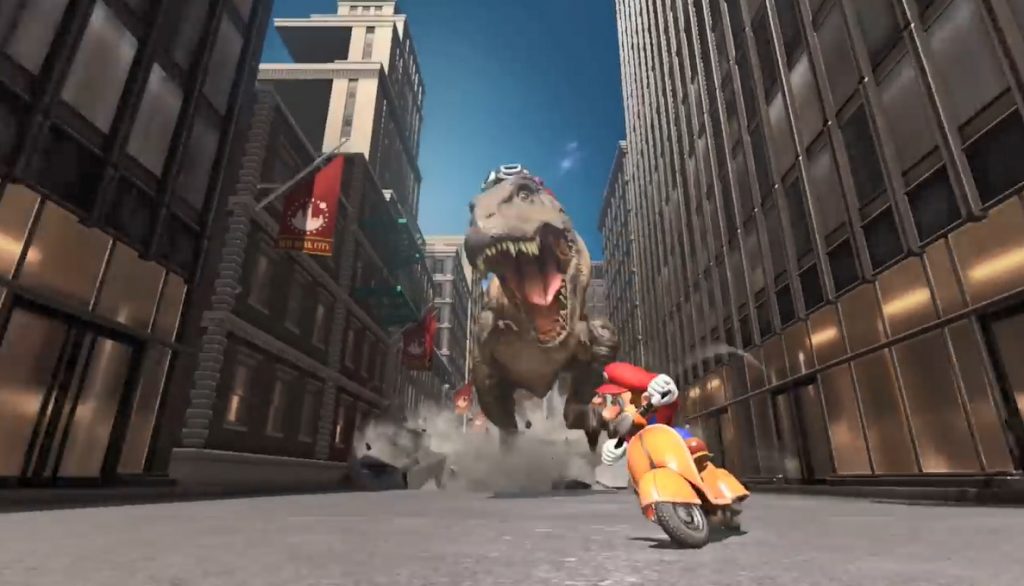 It’s very Jurassic Park like, I’ll say that much.

That said, the T Rex and New Donk City crowds aren’t the only new thing shown here. Nope, another interesting addition is this nifty aviator outfit that Mario’s wearing in the Forgotten Isle area. It’s interesting because just a few scenes back, the T Rex was wearing very similar goggles. Huh, wonder why Mario and a dinosaur have such similar tastes in fashion:

Eh, maybe it’s because the hats aren’t all they seem here. Indeed, look at the one top of this Banzai Bill a few seconds later. Doesn’t it look awfully familiar to you? 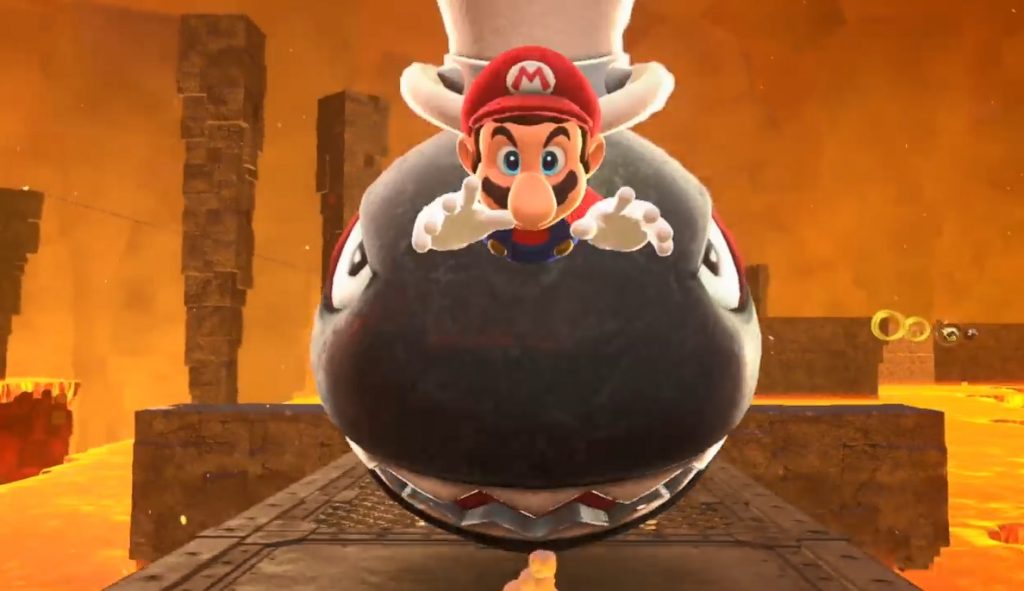 Yep, it’s Bowser’s hat. The one he’s shown wearing in the intro cutscene on the airship.

And that makes us wonder something. Is Bowser also possessing enemies to take down Mario, via his own version of Cappy? The cutscenes certainly support that interpretation, especially with how Bowser throws his hat in the intro. If true, it’d mean that this Banzai Bill chase (and perhaps the T Rex in the city) are actually Bowser trying to attack Mario, not random unlikely coincidences.

Still, enough with the cap theories for a minute. What else does this video show us?

Well, it shows us that Banzai Bills can be possessed by Mario for one thing. Unlike normal Bullet Bills, capturing these ones lets you smash through blocks with ease: 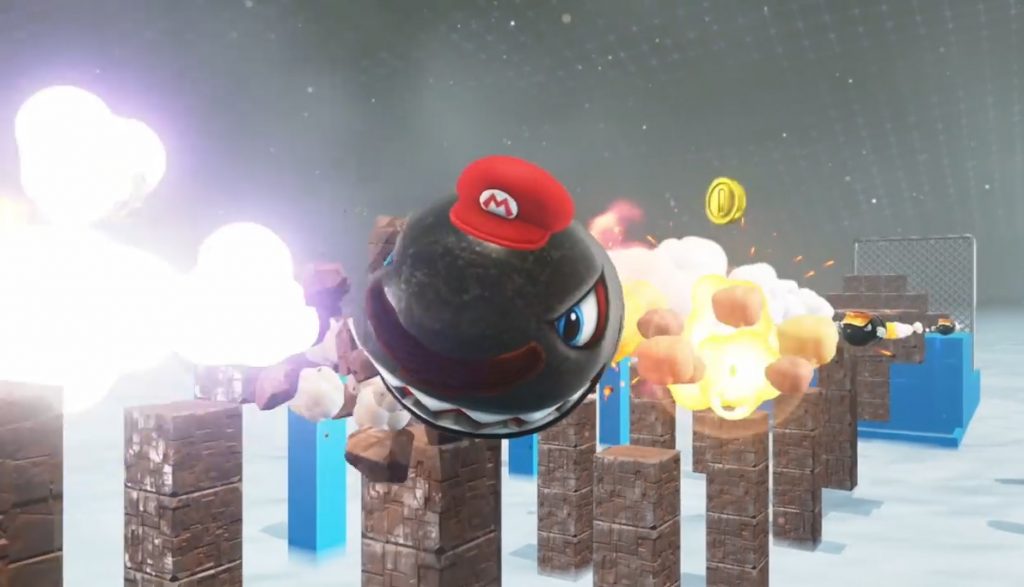 Pretty useful to be honest. Especially if the designers were nice enough to place enemies on top of said blocks, just so they could be sent hurtling to their doom.

Another interesting enemy that gets captured here is shown a few seconds later. Namely, the Foo from the New Super Mario Bros games: 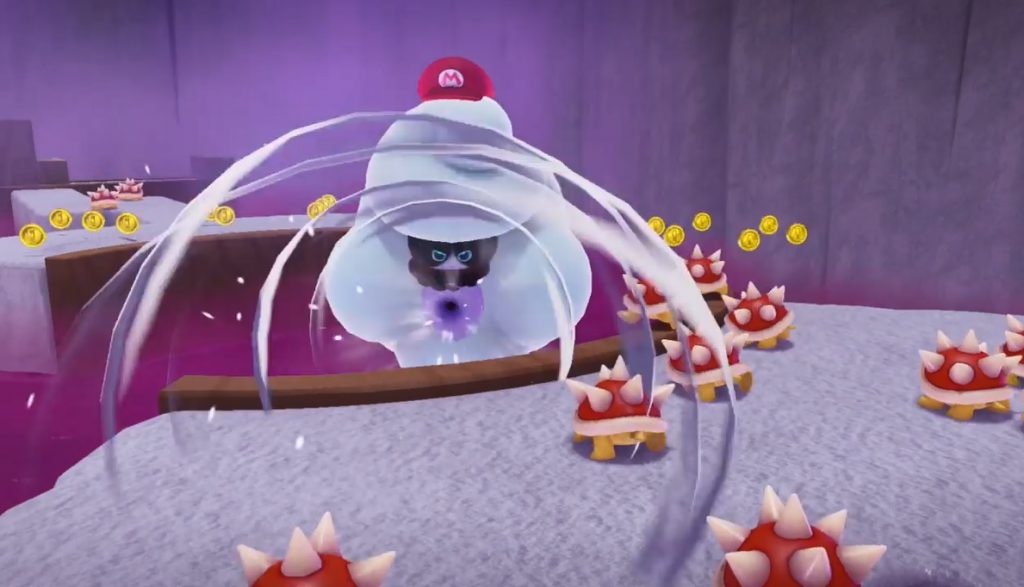 It works about as you’d expect it to (you can blow enemies and objects around), but it’s a neat choice of monster to have in a game like this none the less. Forget Mario being at the mercy of wind generators; now you can make the enemies suffer instead. A very nice bit of payback for all those tricky platforming sections wind physics have ruined in the past…

Which is also the case with how the Capture mechanic is implemented in the Madame Broodal battle. Here you take control of the Gold Chain Chomp she attacks you with, then use your powers to blast it back in her face: 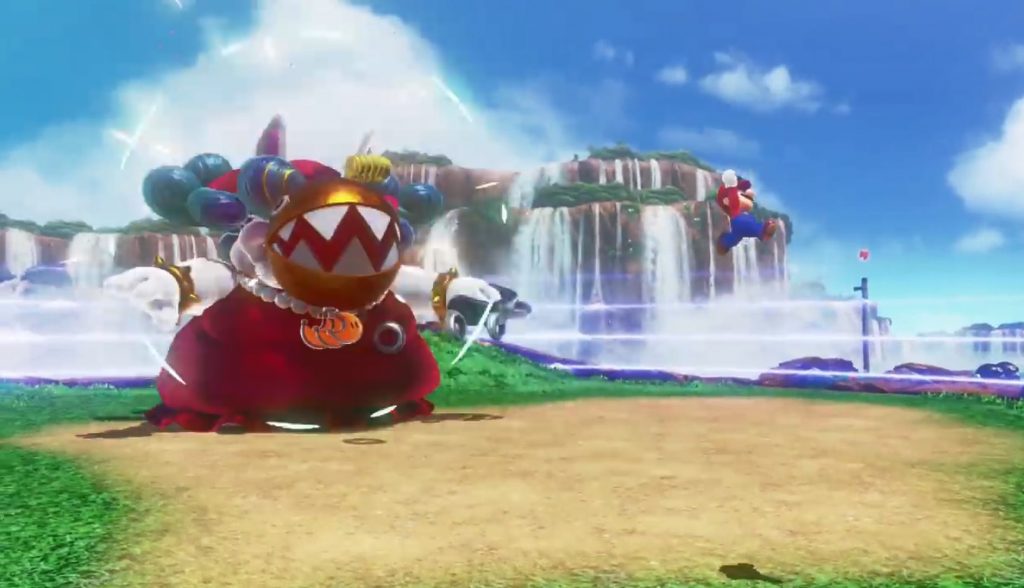 It’s a neat way to fight a boss like this, and another example of a boss battle heavily built around the Capture mechanic.

And that brings us to the last trailer shown in the video. You’ve got Dorrie’s first ever appearance underwater (it never went under in Mario 64 or the Mario Party titles): 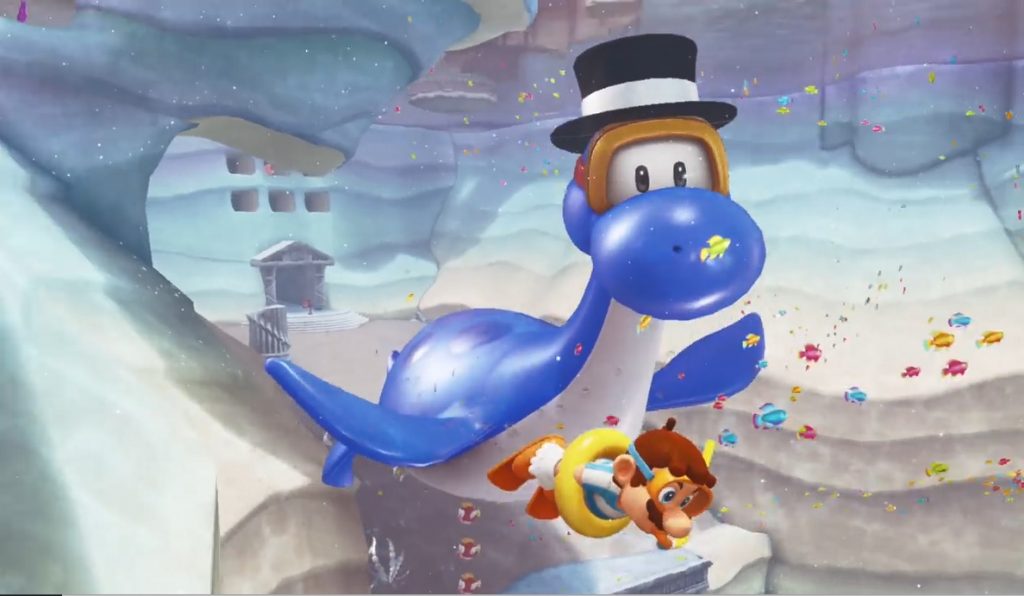 A nice glimpse at a hotel like area in the Seaside Kingdom: 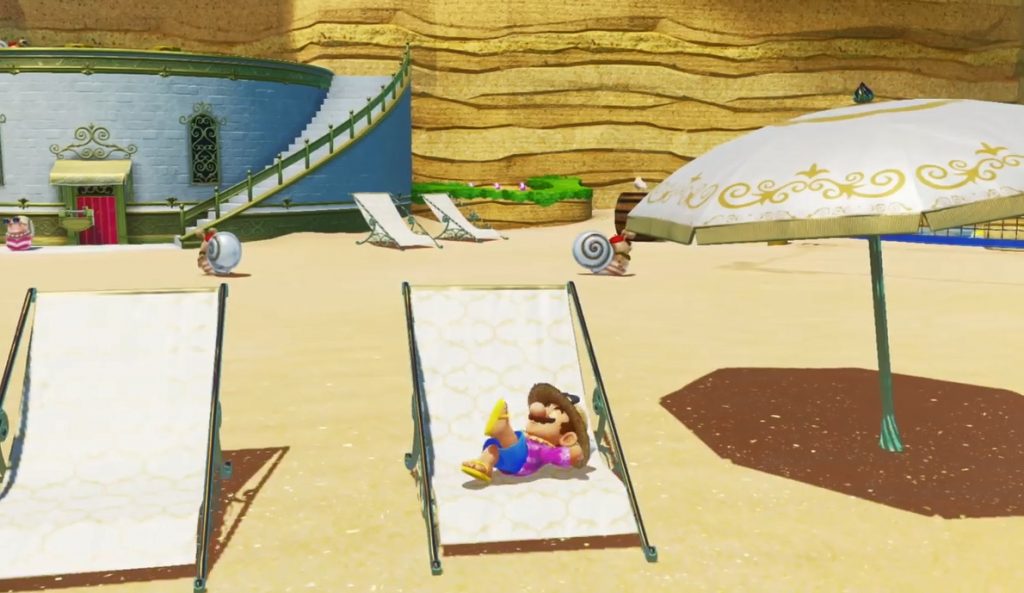 As well as perhaps Mario’s most nightmarish situation yet. Watch out Mario! That T Rex is literally right behind you! 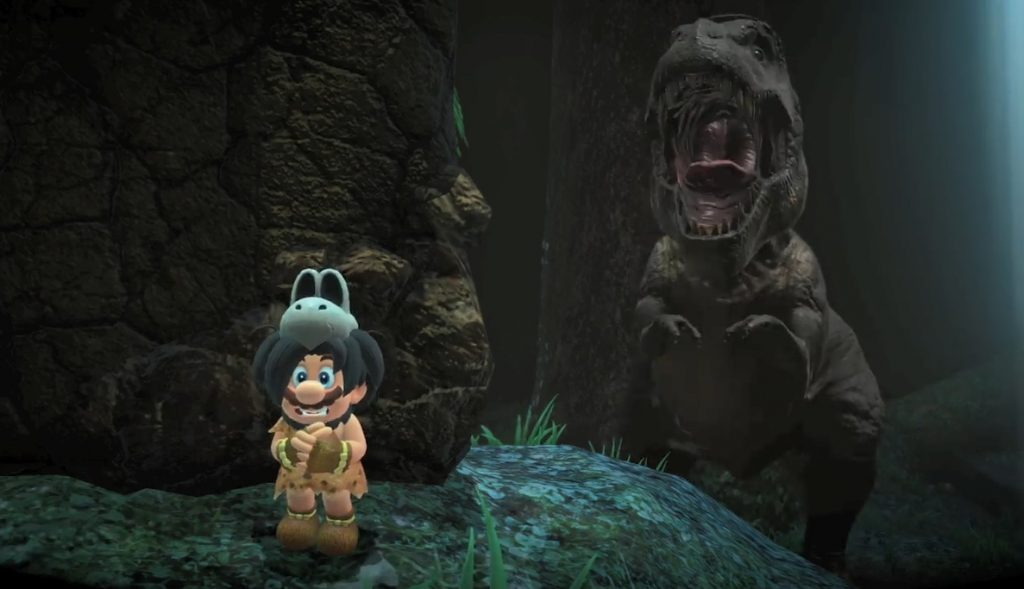 (though based on his expressions, it’s likely Mario has noticed how much he’s screwed here).

Moving on, other parts of the trailer show a few more minor elements that may be of interest to some people. For instance, it seems like traditional Mario style beanstalks appear here: 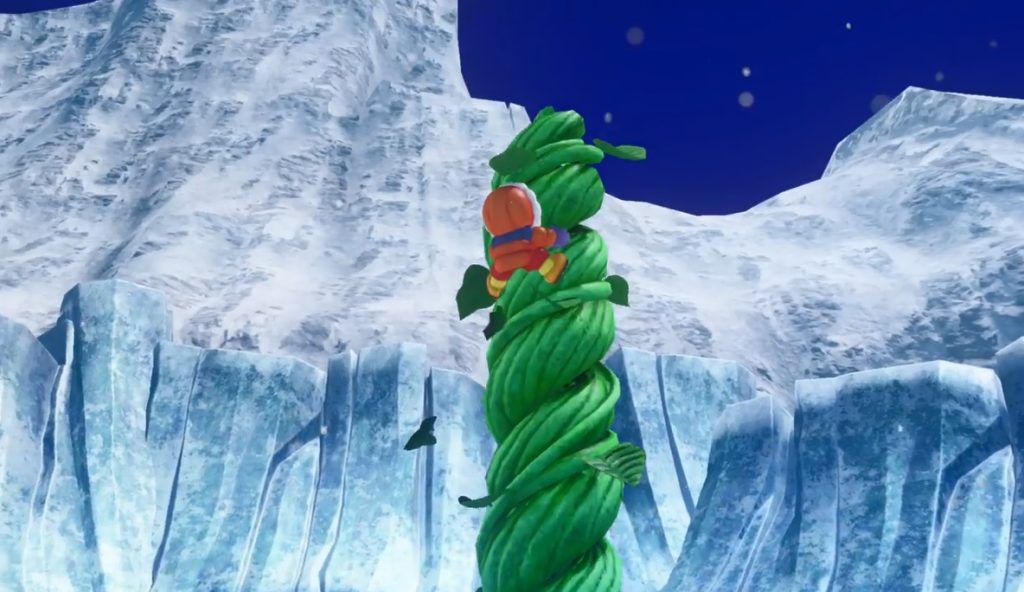 And even move Mario upwards automatically. Neat, at least in the sense these things are much less common in 3D Mario titles.

Still, enough about minor call-backs for now. Instead, let’s look at a very interesting detail from the end of the video: 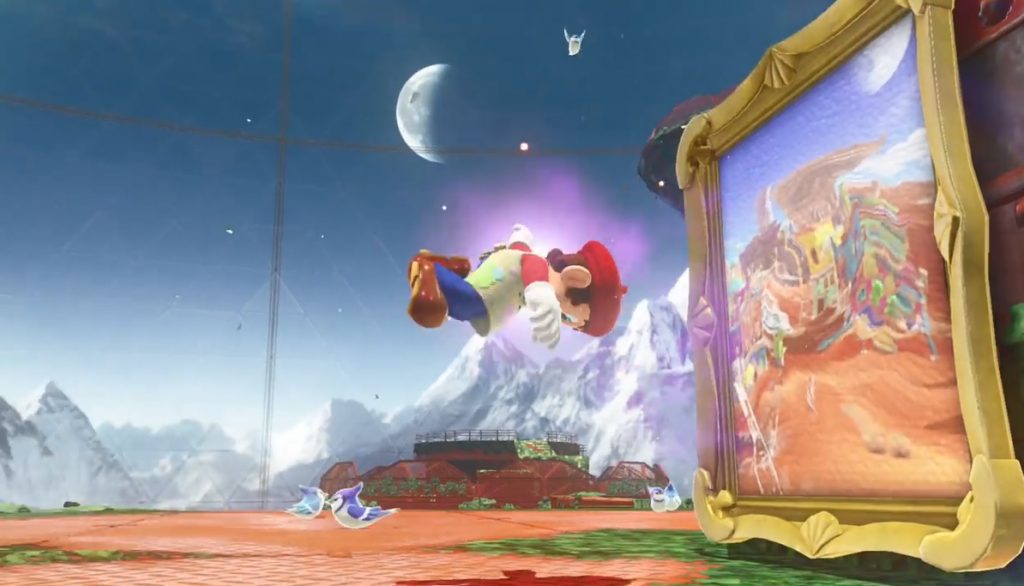 Yes, it’s another painting that acts like a portal. But unlike the last two (which led to New Donk City and Peach’s Castle respectively), this one goes to Tostarena from Steam Gardens. Which in turns makes us wonder…

What is the deal with these things?

Cause it’s not just a theme/story thing. The paintings aren’t placed anywhere you’d expect them to be, they’re in the middle of the level in seemingly random places.

That indicates their purpose is somehow tied to the Power Moons and story. So, what is the connection?

Well, it’s a bit of a longshot, but I suspect the answer the answer is that certain missions scale multiple kingdoms. Like in Banjo-Tooie.

And that’s very much supported by a few very unusual characters put in situations they shouldn’t really be in. There’s that T Rex in Steam Gardens and New Donk City, which makes no sense at all. There’s a random New Donk City inhabitant whose car has broken down in the middle of the Sand Kingdom:

As well at least one Tostarena inhabitant in the middle of New Donk City. So, it seems quite likely these paintings could be connected to this stuff, perhaps as a way to answer these characters’ problems.

Either way, it’s a mystery that likely won’t be solved till the game comes out.

One thing that isn’t a mystery however is this volleyball mini game. Set in the Seaside Kingdom and featuring the snail creatures from the area as other players, it’s yet another mini game you’re able to compete with players online in, as noted by the scoreboard to the top right. 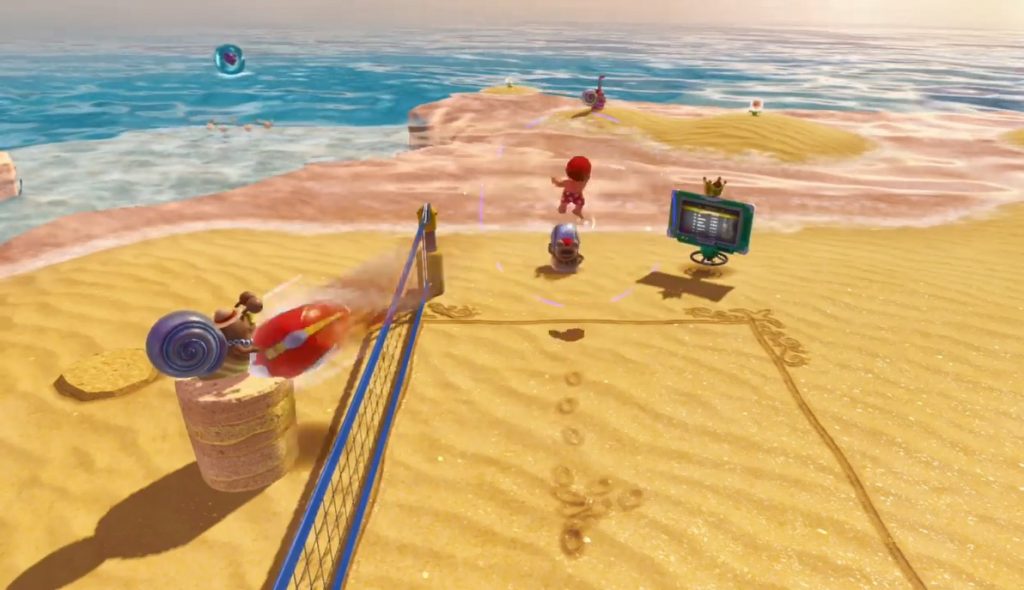 And while it’s nothing too special (for a mini game in a 3D platformer), it looks enjoyable enough to play none the less.

So yeah, that sums up everything in Super Mario Odyssey’s latest trailers. So, what do you think about it all? Are there any new additions there that make you want to play the game even more?

How exactly do the paintings in the game work here?

Post your thoughts on these topics (and more) at the Gaming Latest forums today!