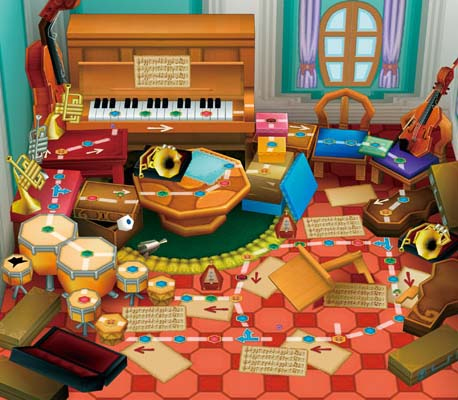 I regret to inform you that I’m actually NOT CM30 – I’m just one of his friends, River J. But I think I have some information that will make my hostile takeover of the Gaming Reinvented website all worth it! Those who have played the miniature Mushroom Kingdom Adventure called Mario Party DS, may recognise the name “Toadette’s Music Room”; It’s the second board in the game and takes place in a cluttered music room full of instruments, metronomes, and sheet music strewn about the floor – which is the most important part of this discovery. Using modding tools, I was able to extract the 3D model for Toadette’s Music Room, and take a closer look at these sheets of music. That was when myself and Squish_Pixelz – another good friend of Gaming Reinvented – made an interesting discovery…

Often times, when sheet music is seen in video games, transcribing it and listening back to the written melody reveals a non-sensical stream of notes, or some random symphony by an old composer like Bach or Chopin. This time, however, something was slightly different. The melody was not only a defined, and even nice melody, but Squishy and I actually recognised it! We couldn’t quite place where, so we looked all over the internet for any mention of this discovery on forums, social media, etcetera. This turned up no results – so our next move was to check the Discord Server for Mario Party Legacy – where we appealed to the userbase for anyone who recognised the melody that I had transcribed from the game:

Thankfully, within minutes, the user Spongyoshi came to our rescue! The sheet music wasn’t perfect as the sharps and flats were missing, making it sound slightly off – but despite those inconsistencies, Spongyoshi immediately recognised the melody as an exert from Mario Party 3’s “Let’s Get a Move On!”, one of the afore-mentioned game’s minigame themes. We had found the reference! Who knew that the bouncing musical notes in Toadette’s Music Room in Mario Party DS actually included a reference to a minigame theme from seven years prior?!

After looking online and finding no references to this discovery anywhere, I decided to share it myself, since honestly it was really exciting as a composer to find such a tiny little music reference that’s very easy to miss if you’re not familiar with how to read sheet music, or just too focused on the game itself to pay attention to little details in the map. But here you go! You learn something new every day…

Side Note: Before Spongyoshi told us what the song was, we made a post on Reddit too, and someone on Reddit pointed out the solution too, so whilst Spongyoshi got there first, I thought I’d at least give them a bit of credit.

Semi-professional musician with perfect pitch here. Yes, that music is actually this theme from Mario Party 3 written out.

The only difference is technically this piece should be in D Major (2 sharps) so the F and the C need to be sharp, but this is a game, so I get why they didn’t bother with that detail lol.