Dr Coyle Has Been Added to ARMS in its Last Update 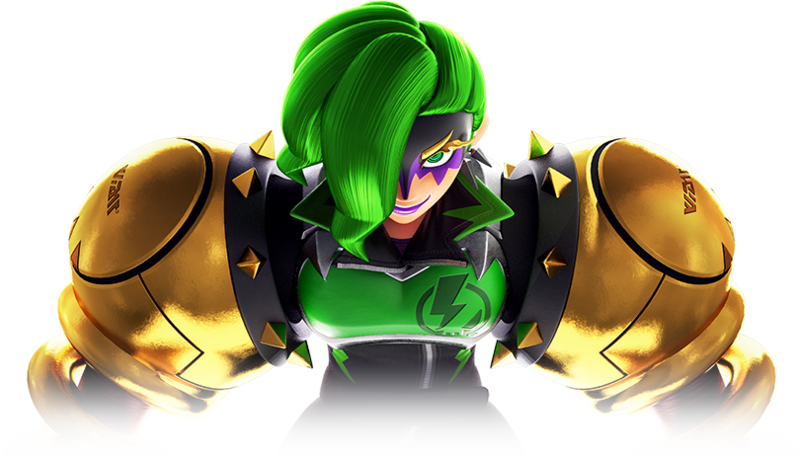 Well, it’s update time for ARMS again! Yep, just a few weeks after Misango and Springtron were added to the game, ARMS Laboratory director Dr Coyle has been added as playable too! Here’s a trailer showing her in action:

As you can see, she’s an… interesting fighter. For one, she completely forgoes the idea of gravity, floating around and merely rising up instead of jumping.

This plus her invisibility/teleporting tricks, makes her something closer to a Kirby boss than a traditional fighting game character, and differentiates her quite well from everyone else in the game.

And that’s not all either. Oh no, she’s also rather important storyline wise too. Indeed, not only was she originally involved in a relationship with ARMS commissioner Max Brass, but her quest for revenge ended up being what made Hedlok and the likes altogether. Pretty neat really, especially given how she’s now the new final boss (on level 7 and above).

Above: Or how she has unique win quotes for every opponent. That’s quite the level of detail!

What’s less neat though, is the DLC situation as a whole. Why?

Because as the ARMS Twitter feed points out, this is the last major update the game will ever get.

Yep, after this, that’s it for new fighters and mechanics in ARMS. You’ll get a few patches, likely some balance updates and other small extras, but the days of regular updates have drawn to a close.

And that’s kind of disappointing really. Remember, ARMS had quite a few unused characters listed in its code. Like say, the mysterious plant themed fighter hinted at a while back. Or the others from the datamine with the codenames Chain, Scroll and Sumo. All of those never seemed to get made into playable characters, despite it clearly being planned.

Were they scrapped? Did Nintendo decide to move on from ARMS a bit early for whatever reason?

Still, at least Dr Coyle is a fantastic new character, and perhaps the best fighter ARMS could have hoped for. She’s got a great design, interesting mechanics, fun to use attacks and generally everything players could want from a new character. So even if ARMS going out after five updates wasn’t intended, at least the game did go out on a high note.

But hey, what do you think about it? Are you happy with Dr Coyle as a character? Saddened the game won’t be receiving any updates?

Say what you feel about this (and more) in the comments below now!