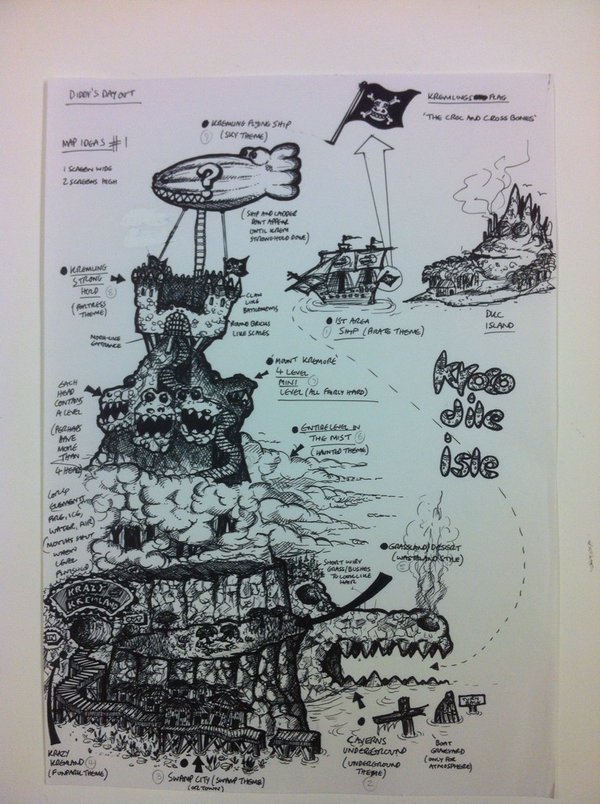 Posted on Twitter by Rare director Gregg Mayles too, so you know this is both interesting and the real deal.  Here are the tweets featuring these early drawings:

Some #DKC2is20 level ideas. I can’t quite remember all of those that made it into the released game! pic.twitter.com/oG5xPHXeXy

So what can we see? Well, as far as the overworld goes, quite a few changes from the final game to be honest. For starters, Kaptain K Rool’s airship is an actual zeppelin in this version of the map, complete with Rare’s trademark goofy eyes and a big question mark on the side. Maybe he was meant to be a Doctor Who fan in this version of the game?

There’s also a creepy looking set of stone faces in the mountain side, under the ominous name of Mount Kremore. Probably not intentional, but they kind of remind us of a certain Zelda CD-i game that should probably just be forgotten about. No, don’t make a joke about ‘making your face the greatest in Crocodile Isle’…

We also see an interesting concept for a mist level, where some sort of haunted area would take place in a part of the island filled with fog/mist, maybe like Silent Hill. Probably best to assume this area ended up becoming Gloomy Gulch in the final game.

Other interesting things we spotted:

As far as levels go, well, quite an interesting variety in the second picture. Some are obviously used in the final game, like the level where you swim through lava by temporarily changing it to water, or the pogo one with Rattly. But others… those seem to have been lost to time. Highlights there include a silhouette level (which didn’t actually appear in the series until Donkey Kong Country Returns in 2009), a level with an old school train handcart the characters drove and an area filled with steam pipes that could move the characters around.

Either way, it’s an interesting look at an already amazing game, and it makes us wonder exactly what kind of cool stuff Grey and Rare might be showing off in the foreseeable future. But what do you think about all this unused content from Donkey Kong Country 2 on the SNES?