Does a Mysterious New GameStop Listing Hint at the Return of the Banjo-Kazooie Series? 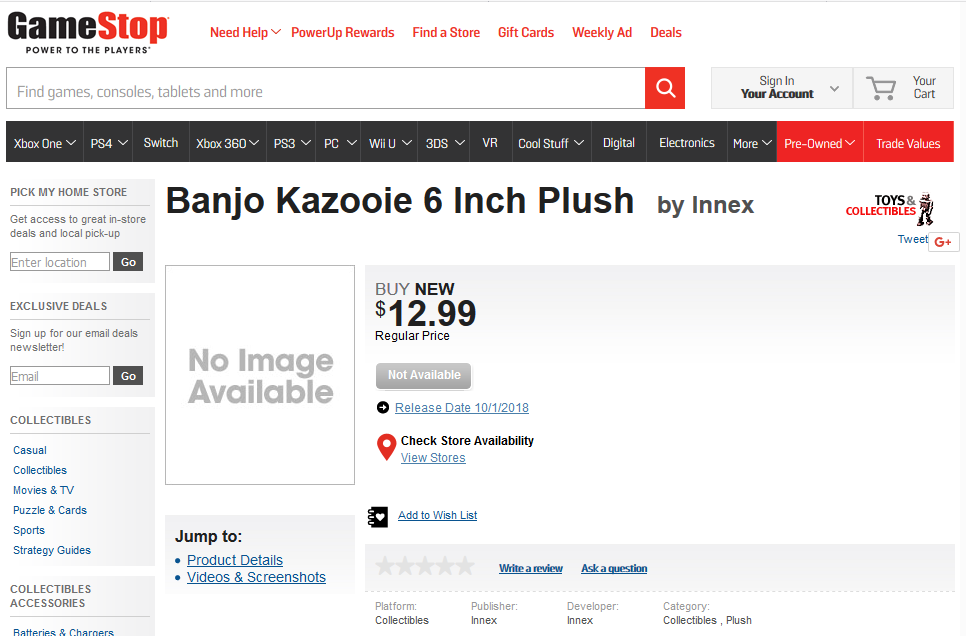 Ever since Banjo-Kazooie Nuts and Bolts, there’s not really been much news coming from the franchise in general. Oh sure, it appeared in Rare Replay, and the games got a few references in Minecraft, but as far as actual new titles go, news has been very thin on the ground.

However, it seems like this may be about to change. Why? Because as the title suggests, an interesting new listing based on the series has popped up on the GameStop website. This listing isn’t exactly for a game or other media adaptation (it’s actually for a 6-inch plush toy based on the main characters), but its curious arrival has sparked some questions.

Like the one everyone’s thinking about right now. Namely… why the hell would anyone randomly release a new piece of merchandise for a series that’s been dead since 2008 (or 2015 in Rare Replay form)?

That doesn’t make a lick of sense. After all, dead franchises don’t exactly move merchandise like crazy, and the level of interest in them in general doesn’t usually support such an endeavour. And it’s not like Banjo is an outlier here either; the merch for this series has been thin on the ground ever since the glory days of the 90s/early 00s N64 titles.

And that’s not the only curious thing about the listing either. Oh no, the date attached to the listing is an intriguing one too. That’s because it’s a very specific one, with the GameStop page stating the figure will be released on October 1st 2018.

Which makes us believe that this isn’t going to be about a single toy.

Instead, it seems like evidence that someone may be planning a revival for the franchise in general. Maybe that could be a remake/remaster, ala Crash Bandicoot N Sane Trilogy or Spyro Reignited Trilogy. Or maybe it could be a new sequel/reboot/other game altogether.

Either way, the evidence suggests something is going on with Banjo-Kazooie, and it’ll be interesting to see what’s in store for the future.