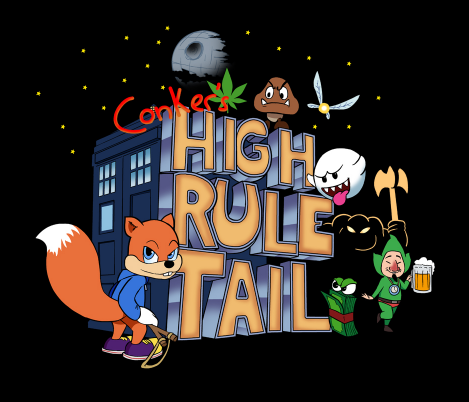 So, do you like Conker’s Bad Fur Day? Ever wish you could play a sequel in the same style complete with video game parodies and concepts?

Well, don’t rely on Microsoft for that one. They’ve basically forgotten about Conker by this point, having gave him a half done port of the original and a hololens test called Young Conker as the only new games in the series.

But there’s still hope. Why? Because as of today, a very interesting hack of The Legend of Zelda A Link to the Past has released on ROM Hacking.net. Titled Conker’s High Rule Tail, the game turns Link’s quest into a Conker game complete with a ton of video game references and amusing dialogue. Making it a sort of cross between Fur Day and Pocket Tales in the process.

As well as the page on ROM Hacking.net where you can download the game:

It’s a pretty interesting project, as you can see in the links above. For example, the game’s assortment of parodies now includes Super Mario Bros, Resident Evil and Star Wars among many others, along with new items and abilities you might not expect to see in such a game.

There’s also a fancy MSU-1 soundtrack too. This lets the game run MP3 quality music on a SNES, with the songs in question often being taken from the games and sources it parodies. Like Super Mario 64 and the Pokemon series.

So yeah, it’s an intriguing idea for a fan game. However, there’s still something a tad off about this one.

And I think that might be just how ‘obvious’ the parodies are here. Yeah I know, parodies nowadays seem to be a whole lot less subtle than they were in the 90s. Heck, those ‘parody’ films by Seltzer and Friedberg are literally just a bunch of references without any real humour at all!

But Conker’s Bad Fur Day wasn’t really like this. It had parodies, sure. The Matrix, Saving Private Ryan and A Clockwork Orange were made fun of in different sections of the game. That’s fair enough.

However, they were done in the game’s own style. It wasn’t a direct parody of Saving Private Ryan or Apocalypse now, it was Conker and the squirrels in a war against the Tediz. It wasn’t literally Conker in the Matrix vs Agent Smith, it was Conker and Berri raiding the Federal Reserve in the style of The Matrix. With the sole exception of the final boss (who looked exactly like a Xenomorph from Alien), it’s very rare that the game never puts its own twist on the setup or joke.

This game on the other hand… it feels like Conker going on a crossover spree complete with the exact same characters, enemies and concepts as the games he’s parodying. Not all of it mind you (the hub worlds do put their own spin on a lot of things). Just enough of it that it feels more like Mushroom Kingdom Fusion than Conker at some points.

Still, it’s not a bad game. No, it’s an amazing game, and one of the best mods of A Link to the Past ever released on the internet. So if you want a great new 2D Zelda experience on the SNES, or you want a new Conker’s Pocket Tales/Fur Day hybrid, this is ideal for you. Heck, it’s a million miles better than Young Conker that’s for sure!

So go and check it out. It’s an interesting game and mod that pushes the SNES Zelda title to its limits, and a good follow up for fans of the Conker series.