Beyond Good and Evil 2: First In Engine Demo Footage 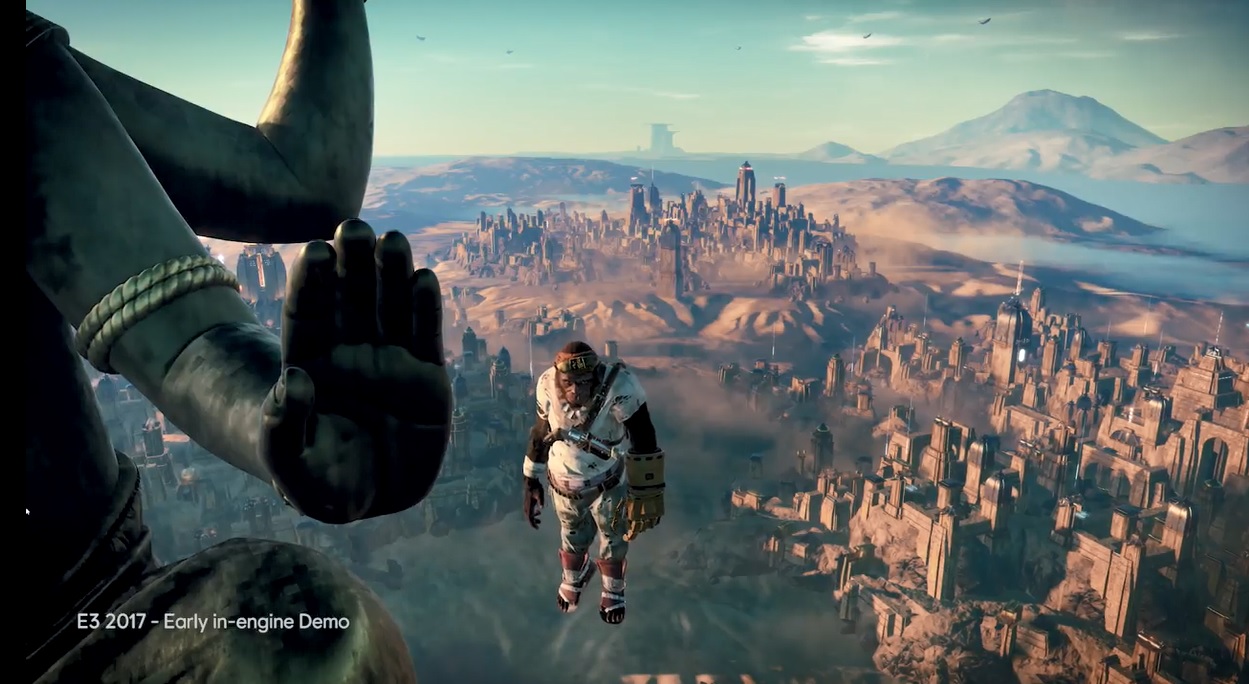 For the last few months, we’ve been hearing a lot about Beyond Good and Evil 2. We’ve heard how it takes place in a large, procedurally generated universe. We’ve heard comments about its epic scale and scope, or how the physics go beyond anything else seen in the medium.

But we haven’t seen much actual footage of the title.

Until now. Because just a day ago, Ubisoft finally posted posted the first ever in engine footage of Beyond Good and Evil 2!

So here it is. Here is that first footage showing some of the game’s systems in action:

On a technical level, it’s amazing. The scale of the game is incredible, with you being able to move between planets, countries and cities at the drop of a hat. The spaceships you can fly look excellent, and seem to work exactly as you’d expect them to.

And well, that jetpack looks quite nice too. It’s certainly a fun way to get around, and looks to be another fun mechanic in this generally promising game.

However, it also still worries me as an actual game.

Because of how much more ambitious this sequel is. Remember, a large world doesn’t necessarily mean a fun to explore world. It certainly can (and some sandbox games have been truly magical experiences for me and many other players).

But at the same time, it can also be quite dull if nothing is actually there. No Man’s Sky may have had an enormous universe filled with planets to explore, but you couldn’t do anything interesting there. It was basically an endless number of cookie cutter locations built by a computer algorithm.

The original game knew this quite well. It wasn’t the next GTA, it didn’t have a Breath of the Wild scale open world to explore.

Instead, it was just a fun Zelda clone with a photography gimmick and some story about a girl called Jade and her uncle Pey’j as they tried to stop the hidden machinations of a group of aliens on their planet.

It was fairly low key, but it worked well.

This game however, it was far more ambitious. So much so in fact that I worry the creators have fallen prey to massive feature/scope creep and second system effect. That they’ve become so obsessed with making the game of their dreams that they’ve forgotten what really matters for this series.

And that’s what worries me. That the lack of focus on elements people liked about the first game (read, not spaceships and jetpacks and what not) might indicate Ubisoft doesn’t really know why so many people liked it. Or that they’re putting less focus on the intricate designs of the ground based areas to focus on the huge open worlds and physics possibilities.

Still, I’m optimistic none the less. I mean, you can already see some locations that look like they’ve been tweaked by actual designers along the way. Like the city shown in the video with the giant Ganesha type statue covered in glowing lights and markings.

So there is hope there.

But until a new trailer comes out and shows the game as it is at ground level, I’m just going to stay cautiously optimistic about the whole affair.

Let’s hope Beyond Good and Evil 2 turns out to be classic we’ve been waiting decades for!