As anyone who’s seen Jim Sterling’s videos or the Shitty Steam Games subreddit knows, quality control is not exactly something Valve cares much about it. Asset flips are allowed with no original content. Starter packs from asset stores can be posted without changes. Heck, you’ve even sometimes got idiots being able to ‘sell’ fan games for a while before a quick DMCA takes the page down.

But even Valve has their limits here, and a recent game called ‘Art of Stealth’ crossed them. Why?

Because as Valve states here, they detected ‘unacceptable behaviour involving multiple Steam accounts controlled by the developer of the game’. Or in other words, he was apparently using fake accounts to give the game good reviews.

So here’s Valve’s full statement on the matter, if you need to know more about their reasoning:

For these reasons, we are ending our business relationship with Matan Cohen and removing this game from sale. If you have previously purchased this game, it will remain accessible in your Steam library.

It’s pretty bad really. But wait, it gets worse!

Because as people have found out online, Art of Stealth’s developer ‘Matan Cohen’ is not someone who takes criticism lightly. Or at all for that matter.

So not only have they been trying to filter out negative reviews for the game on its now gone Steam page, but they’ve also been sending DMCA notices to anyone who calls out their bullshit in a video review of the title. Like say, Jim Sterling:

Or 0Bennyman. Heck, the latter even got a comment from them saying they’d sent a DMCA notice and warning him that his ‘video would be removed soon’!

Talk about professionalism! Guess you think acting like a troll in a video’s comments section is a good use of your time now?

Well, it’s not. It’s just wasting time that could be spent improving your game.

Just like targeting other sites is. Because what’s more, it’s not just YouTube that’s being targeted here either. Oh no, as per usual for games with developer controversies, a topic on the matter was quickly made on the ‘Shitty Steam Games’ subreddit. So what did the developers do?

They tried to get it taken down for doxing! Again, great move guys. Instead of working on your game and trying to make it better, you go after those mean critics with your takedown notices and threats! I’m sure nothing will go wrong, right? 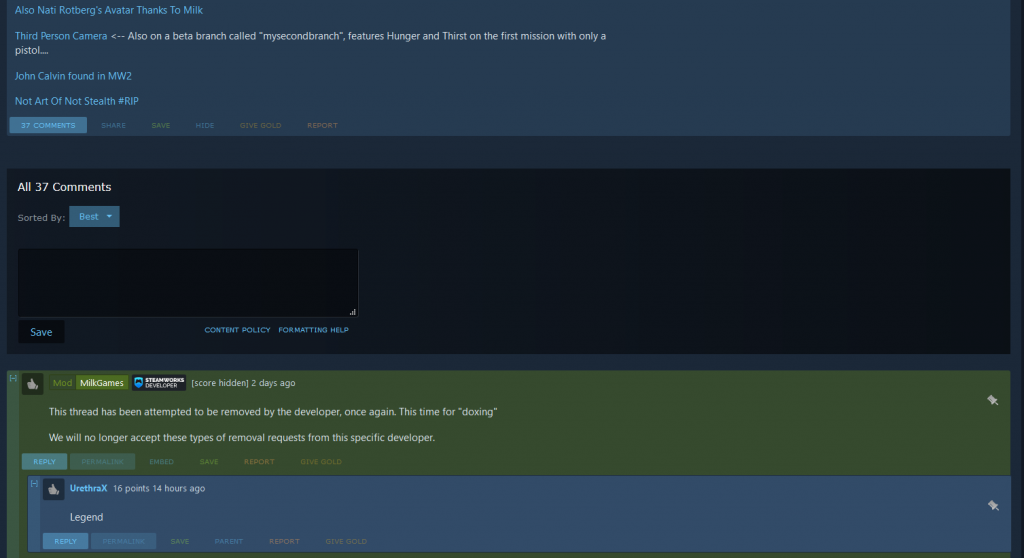 Oh wait, the Streisand Effect exists. So now not only are your critics laughing at your complaints, but it’s now headline news on the likes of Kotaku as well. So what was once a simple case a game getting criticism is now basically Digital Homicide 2.0 with all the bad press that entails.

And talking of Digital Homicide, it seems DMCA threats weren’t enough for them. Oh no, they also moved into legal threats too. Like the three they sent to Jim Sterling on one night:

Even their legal threats are asset flipped.

Or their equally laughable one sent to 0Bennyman. There, they actually claimed criticising the game was against the End License User Agreement!

What an absolutely ridiculous claim.

But hey, the game’s gone now, and the developer is banned from Steam. Let’s hope they take this as a lesson, and stop being so defensive in future.