ARMS 5.0 Trailer Released, Update Will Be Released by End of the Year 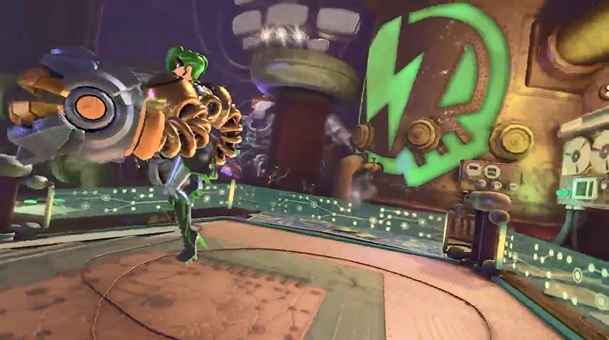 Ever since it launched earlier this year, ARMS has gotten update after update from Nintendo. It got its first one shortly after release, with LAN play and arena mode being added less than ten days after launch. It got new modes and options like replays, badges and Hedlok scramble in every update, with the fighting experience being greatly improved and added to as a result.

And well, where characters are involved, there have been a ton of those added to the game too. Max Brass, Lola Pop, Misango, Springtron… it’s like every boss and neat idea the team had got promoted from a background character to part of the main roster.

But now, just days before the end of the year, we have another one! Yep, Nintendo’s just announced ARMS version 5 on Twitter, complete with a mysterious new fighter and some epic as hell music to boot. Here’s the trailer if you haven’t seen it yourself:

As you can see, it’s a hell of a lot more dramatic than the previous additions. In fact, with the ominous laboratory like arena and the random teleporting the newbie has it, it seems quite likely they tie heavily into the game’s story, with some even going as far as to say they could be the ‘Dr C’ we hear about in background material.

It’d certainly be plausible given the character’s creepy ways, and the dubious ethics shown by ARMS Laboratories Inc in universe.

However, their role isn’t the only interesting thing about this DLC. Oh no, as hinted by the Japanese Twitter account for the game, the role of the DLC itself is interesting too.

Why? Because it may well be the last DLC ARMS gets at all. Indeed, as mentioned by ARMS Cobutter on Twitter, V5 is the ‘last major update’ being carried out this year. This could have any number of meanings (especially given how bad machine translations are on Twitter), but it could potentially mean version 5 is the last update ARMS will be getting.

Either way though, version 5 is coming before the end of the year, and will feature this mysterious new character. So, what do you think about it? Are you interested to see what’s new here? Do you have any theories about who this fighter may be?

Post your thoughts in the comments here or on Gaming Latest’s forums today!