As per the rest of the games in the Mario & Luigi series, Mario & Luigi Dream Team includes a handful of interesting mini games (outside of the Mad Skillathon and Battle Ring ones with pages dedicated to them) that can be played time and time again for high scores and prizes.  Here are some descriptions of each and a list of prizes for them.

Comments/Strategy: Well, how do you usually solve a jigsaw puzzle? Look for the edge/corner pieces first, then look at the picture on the top screen and try and figure out which pieces are likely to go where based on what characters are featured on them.  It’s extremely easy, since the time limits given are ridiculously generous and the pieces slot into place automatically when you get them correct (even if you’re just moving a complete random piece across the board and coincidentally happen to find where it goes).

Notes: This is the only mini game on the list which doesn’t have to be completed in some form in the story.

Pi’illo Blimport: To the north east of the area where Mario and Luigi take the welcome quiz.

Mushrise Park: On a high ledge in the area with the broken fountain.  Can be gotten by spin jumping to it, side jumping to it or bouncing up from below with the Bros Ball.

Dozing Sands: Go right past the place where the Dreamstone used to be to the next area, and it’s on top of some high pillars you have to cross with the Ball and Spin Jumping.

Wakeport: Kylie Koopa practically gives you this one, by throwing it into the room in front of you where you first speak to her.

Mount Pajamaja: To the northwest of the area where Mario and Luigi can jump off the cliff to land near the oxygen valve below.

Driftwood Shore: In the area near the warp pipe, on a ledge past a hole only Mini Mario can enter.

Somnom Woods: In the third area with the poison water, near the south of the ‘screen’.

Neo Bowser Castle: In the south west of the first room where Kamek randomises the doors, on a solitary metal platform in the lava. 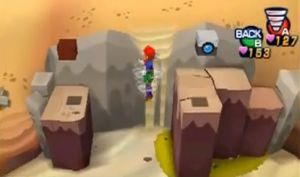 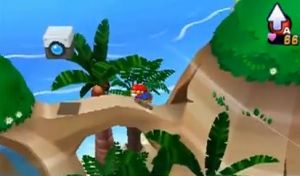 If I can find pictures of the Pi’illo Blimport, Castle, Mushrise Park and Somnom Woods locations, they’ll be added.  You can blame Youtube LPer reluctance to do sidequests for the lack of these, along with the fact I’ve already got them all and hence can’t tell the camera blocks from the others. 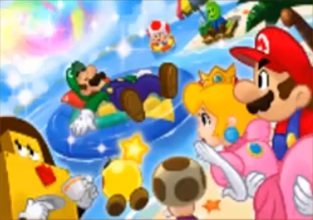 Description: A mini game where you have to make Mario burrow into the sand and push crabs out by jumping when underneath them.  Sort of like how you dig up beans, except with a bunch of moving targets.

Comments/Strategy: Ah Mole Hunting.  Not only is it a mini game that you’re literally forced to beat twice to progress with the main story, it’s also one of the most unpleasant, slow paced and generally annoying ones in the entire game.  Basically, you want to predict where the crabs are heading (based on the sand trails), then jump up when they pass over you, which is much easier said that done.  You can also use the weird orange box thing too, jumping up from underneath it makes all crabs on screen pop out and count as ‘caught’.

Notes: The most misleadingly named mini game in the franchise?

The Ball and Rings Mini Game

Description: Jump through the rings without landing on the same tile twice or hitting the moles.  That’s pretty much it.

Comments Strategy: Coming soon.  I need to draw up a few maps for these mini games, since this one requires you to take one exact path round the arena.  Still, if I can give any immediate tips… watch the shadows of the rings, since the game’s camera angle is a lie. Remember, it’s very possible for the ring to appear on a tile one north of its actual location thanks to the style and how the ring is floating in mid air.  So look for the ring shadows instead, those are the actual tiles the rings are located on.

You can also find a list of solutions here:

Other Times: Absolutely sod all!  Thanks a bunch you jerks!  Thanks for wasting my bloody time!  Makes me wish the Mole Hunt had you kill these guys instead of crabs…

Notes: I have no idea what this mini game is really called, since it’s never named in game.