Shatter the Illusion/A Nightmare to Remember 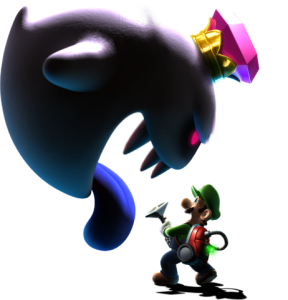 After a cut scene where King Boo taunts Luigi with Mario’s picture, it’s time to take down the Boo King once and for all. Here’s how to defeat him in the final boss battle:

The first phase here is pretty simple. You’re in a glowing arena in a new dimension, and King Boo tries to pound into the ground. This will cause spike balls to appear and roll away into the walls.

So what you need to do now is avoid King Boo as he slams into the floor again, which will bounce the spike balls high into the air.

You’ll then see their shadows appear, so lure King Boo under one, then hold your flashlight on him to make him stop moving. The spike ball will hit King Boo and knock him out, so now just go and suck him up with the Poltergust 5000.

It’ll probably take more than one round of this before his health is ‘gone’, but it’s not particularly difficult yet.

But then, you end up seeing Luigi slide into a mansion corridor! This is a chase scene, with King Boo behind you all the way.

Just avoid everything in your path. Tables and chests of drawers wil appear, sand will appear on the floor to slow you down, there’ll be columns littered around, just stay clear and don’t stop moving. When you come to a circular pad, use it to bounce over the nearby barriers. Avoid anything generate by the purple lightning bolts. Grab as many hearts and gold bars as you think you can manage. It’s not a difficult chase thankfully, and King Boo does ‘only’ take away 20 damage per hit, so you can mess up once or twice.

Eventually, you’ll be launched into a second arena.

For the most part, this is the same as the first phase. However, King Boo will first start off by blasting lighting bolts across much of the arena, so don’t stand on any ‘lit’ panels while this is going on (these mark where the lightning will hit). He’ll also lunge at you a bit, although it’s slow and easy to avoid.

Again, lure him under a spike ball once they appear/fly into the air, and suck him into the Poltergust again. You know the drill by now.

After you deplete his next round of health, another corridor chase sequence begins! This one is similar to before, except you’ve got to avoid suits of armour striking with their weapons, objects in dark areas only briefly lit by the lightning in the background and icy floors to boot. It’s easier than it sounds.

Eventually, you’ll be flung into another arena.

This time, King Boo shoots lightning across the whole battlefield. However, one tile won’t be lit each time, so stand there to avoid the blasts.

He’ll do this four times before directly coming into the arena and attacking manually.

With the exception of a few new ‘danger’ tiles on the floor which either act like ice or spikes, this phase is much the same as the last two. So lure him under the falling spike balls to stun him, then suck him up with the Poltergust 5000 to do damage!

He’ll also randomly go to the background and shoot lightning again, dodge it like you did before.

Now the battle’s over, enjoy the ending credits and catchy music!